HomeForumRevolversPost pics of your guns 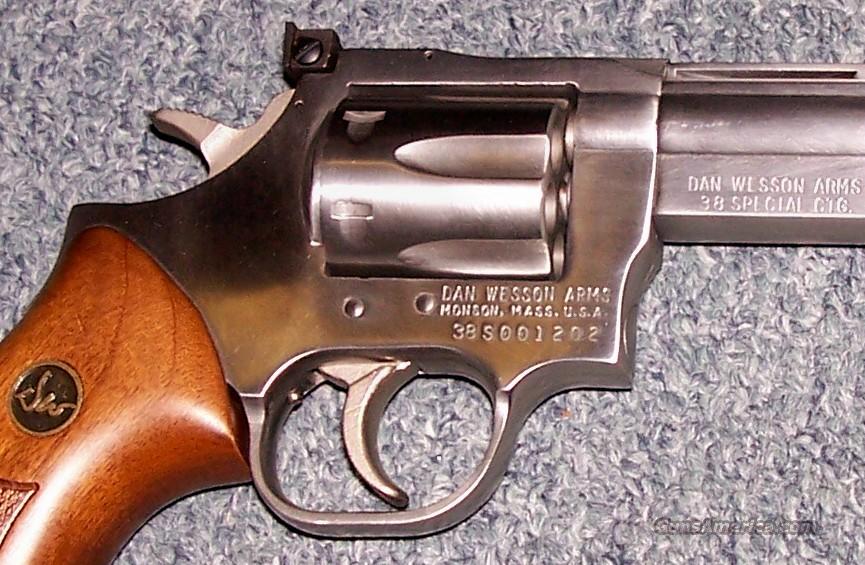 Hi all here are my three Dan Wessons. Sure have enjoyed the pictures of yours!

All three are Monson revolvers that I bought new back in 1987 to 1990 When I shot Silhouette. All three came from Elgin Gates “The Silhouette” The 445 was one of the first ones with Elgin's initials in the serial number

My one and only for now.

This is my 722 HV8, but the gun is at DW currently having the cylinder chambers honed due to cases sticking and requiring removal with cleaning rod. I sent the gun in with the HV6 installed and the HV8 here now is in the safe with a red dot installed instead of the scope. Also the Houges are gone and Pachmyr Presentation grips are on now. Will do new pictures when gun is back home.

Might as well post the 357 HV6 with the new refinished woodie installed. It will have another coat of clear before complete, because install was done only for picture.

Very nice guns Guys...  Waldo what kind of scope mounts are you using on your 722?

B-Square, but the Aluminum (silver color) is no longer available and that may be true with the blued also, but not sure.

I remember reading an author of one of the handgun mags back in the 80's who said his favorite squirrel hunting gun was his scoped .22 Dan with an 8 inch barrel. He said it was remarkably accurate. I have always wanted one of these, is yours your most accurate gun? Also, one of my Dans has a problem with sticky cylinders, I clean them and it does help but they must be cleaned often. I wonder if there is a good flex hone or something that we could use instead of having to send in.

Take a small steel rod that will spin true and wrap with 200 or higher sandpaper.  Use a tiney amout of tape to stick it to the rod and roll on a cylinder width strip til large enough to fit in the cylinder with light resistance.  A drill press is best, but properly braced and keeping the drill square to the cylinder move forward and back; taking care not to move much past the cylinder at either end.  I used this method on a stainelss auto barrel that had a tight chamber, and later on one of my 357's that had been used for a lot of 38's and had a binding ring where the 38's were fired.  For the rings I used 600 paper and kept polishing til the cylinders were smooth and shiney.  I did this years ago and both are still shooting well.  Be sure to enter the cylinder from the back or you will only be opening the throats and even when doing throats; you go from the rear to prevent rounding or ovaling the throat mouths.

I have a couple of 22 rifles, Anschutz and Browning T-bolt, to name a few that are more accurate, but that may be just me. Not to mention I have never sat down and benched rested the gun to see. I haven't had it that long anyway and have never really put the gun through its pases..

As far as sticking cylinders go be very careful with the rod and and sandpaper as you can end up ruining a cylinder real fast.

Mine was doing the same thing really bad and the cylinder upon inspection under magnifying glass appeared to never been finished honed, so I sent it to Keith at DW with a note as to problem and what I believed was the cause. He has had it a week now so I should be getting it back before much longer I hope.

Thanks gentlemen, the 200 grit solution is tempting. Waldo, interested in the cost and turn time for the job, could you post when returned? In the early 90's I sent one of my model 15s in to correct a timing issue, the cost was almost nothing and turn time was about a month I believe.

Robert, in a previous post you stated that the DW.22's were either tack drivers or shot poorly, is this quality issue related to factory location i.e. Monson, Palmer?

Sure I will post here as to turn around time and cost.

As far as possible reason some 22's are better then others may very well be the tension applied to the barrel, too much or not enough. But also could be a bad barrel and that is a cheap and easy fix either way.

Most complaints came from the Palmer guns, but a few came from Monson owners, but when someone emailed a complaint; at least 4 or 5 would reply how accurate their's was, so it seemed many more were accurate than not.  There were more problems with all models of Palmer guns than Monson, and Monson had an excellent customer service as my brother sent his model 15 back for some problem and they covered postage both ways as well as a complete workover of the pistol, with a complete list of replaced parts way and above the problem he sent it in for.  Palmer would review each problem and decide if it was their fault or owner abuse.

I'm jealous at this point!