Why, because you could shoot your toe off?

That would be a real bummer.

That suggestion not to holster makes some sense, in firing mode with one in the pipe, you could do some serious pedicuring if the trigger shoe was snagged on the way into the holster!

Can't understand why more of you fan-addicts out there have not posted more pics of your SA treasures! I know there out there!

Well, I got all giddy about posting pics of my guns a while back & posted this in threads where I probably shouldn't have. So you guys have seen my SBH before, but I guess I can post it in the correct & official single action thread, too. 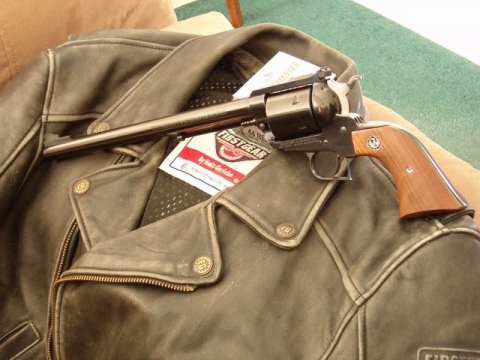 The stock grips wre a little small for my hands, so I did some looking for what I hoped would be a suitable replacement. I read that other guys seemed to like Herretts grips on this gun, so I found a pair. (crappy pic, my camera hated me this day honest they're not really orange!) 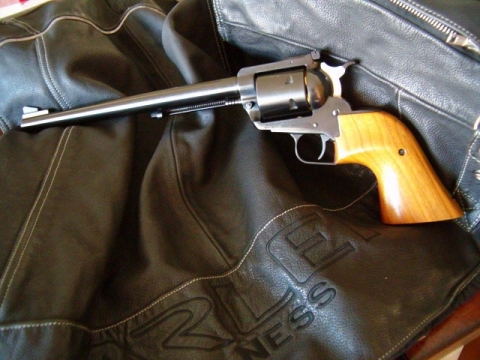 Well, at first they felt too fat for my hands

But after a few trips to the range, I decided I really like them. The way the gun behaves, I have named it the "smile maker"...because with each trigger pull, you can't help but have a huge grin on your face.

I made this one it's own special Pac case, complete with a "buckle-o-bullets" from a belt maker in Montana who recently relocated to Arizona. 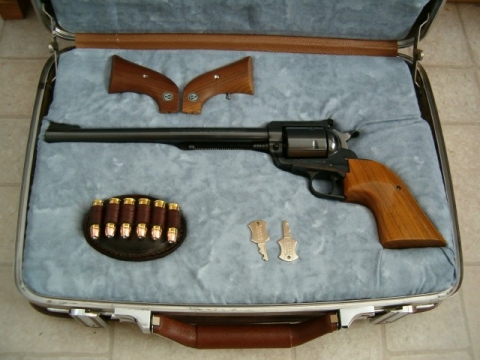 Sorry to disagree, I like it. I have big hands and a .44 needs a grip that fits. The first pistol I can remember that caught my eye was a colt semi auto .22 that was blue with blonde grips, back when I was a kid.

Blue and blonde what a combo!

Guys, I'm excited & I just have to tell you about my latest grab!

But I have to warn you, I did stray temporarily from the DWAS.

I have been sort of semi-interested with the United Sporting Arms single actions for a year or so now, and have had plans of grabbing some if the opportunity presented itself at a moment when I had money. However, until I spotted a small blurb a few weeks before IHMSA80 started this thread, I had no idea that they made some examples with Silhouette in mind.

I clued into the ad on GB that had apparently been there quite a while, for a USA Seville Silhouette .454 Magnum (Casull). This guy had some less than flattering pics & a $1K price tag. What a cool gun, but that's about double what I wanted to spend, so I watched the auction make about 4 re-runs.

In the meantime, the gun had really piqued my interest, then SMF posted that link with mucho info on the Single Actions site, about this company's guns and discovered that if what he's writing is true, this gun is one of FIVE made for IHMSA!

That was it for me, now I was really interested! I mean, I've never owned 1 of 5 of anything in my life, ya know? I e-mailed the seller for more pics & squeezed him for a better description of the gun, something more then the two lines he put in the ad.

In the meantime, another bidder had bid it to within $75 of the guy's BIN price. There were no more bids & the auction ended. Then the seller replied that he was gonna list it next time, with a $100 lower reserve. I decided that if the previous bidder ran it back up to where his last bid was, I would just hit the BIN button but it went the whole week & no bidders.

Then I pried every last penny of play money from my stash, shook all the change out of the couch & surrounding chairs, and mailed my payment.

Time passed, as I watched some pretty nice DW deals come & go I couldn't help but think maybe I had been an impulsive idiot. Who in their right mind would plunk down that kind of money for an old gun? Then today I got that welcome call from my FFL "you have a package" WOO-HOO!

I must say that the gun looks MUCH better in person than it did in the pics & I'm happy with my choice! The pics made it look much more scratched than it really is. So here's my newest addition to the toy pile & the first dabble into CRA in many years. 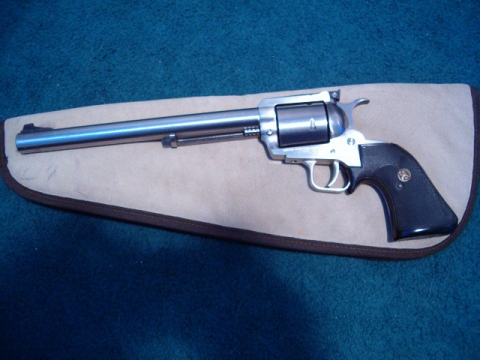 It's been shot a bunch & wasn't cleaned the last time out. There is a little pitting at the end of the barrel for some reason, otherwise the finish is really good. However, those Pacmayr's fit terribly! I thought I'd try grips from my Ruger on it, because it looks really close...wrong! They're sorta close, but different enough that I'm going to have to go back to the drawing board.

I tried to get some decent close-up pics, but it's too shiny & my poor camera was going to have none of it. This is the best one I could coax it into. No, I haven't given the gun a good scrubbing yet. 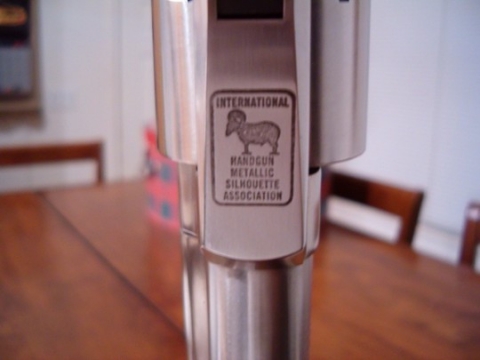 This is the largest caliber I've owned so far & I'm excited to see what it'll do. Oh & I think I know why they only made five. Haha! I have a hunch the gun is too heavy for IHMSA's weight limit rule, so they probably didn't have many takers. The barrel on this beast is at least twice as thick as my Super Blackhawk & the gun does weigh a bit more.

Sorry for being long winded, I got carried away.

Charger,  Nice aquisition.  I watched that gun for months but was always unimpressed with the pics too.  Glad you took the brave step I never would and found it a prpoer home.  I was rather sure it had to be one of the 5 made as well.  Did the serial number back that up?  Lee Martin, the man that wrote the article you referenced is still around and could maybe comment on it if you asked him.  If you can find a set of good grips mage, let me know because I dislike the Pachmeyers on my 375 USA Seville as well.

That's a real treasure.  I hope you can find some good grips to show it to it's best.

Charger - Wow!  Great acquistion and a great story to boot!!  Thanks for all the detail and good luck with that monster!

Nice looking toy... I might have to start keeping my eye open for one of the United Sporting Arms guns now!

I would love to give that stranded ammo a good home.

PM on the way.

As of yet, I'm not sure if the serial number backs it up, he didn't cover the numbers much in that article...unless I read it funny. But I do plan to contact Mr. Martin & see what sort of additional info he may be able to give on it, and if he can confirm with the s/n. I'll report back, with what he sez.

To the rest of youz guyz, thanks!

Like most of you, I find appeal in ordinary appearing guns with a unique & extraordinary twist...like DW's, for example. So I'm as excited about this one, as I was/am about the DW's I've been fortunate enough to obtain.

Woops, I posted in triplicate!

It gave me some error when I posted, I'm not really trying that hard to up my post count, honest! 😀 LOL!

WOW! Charger is so excited he went full auto on us!!!   LOL

Great lookin piece by the way.

Not only did he go full auto, he was quick enough to pull them back before I got done with my post.

Do I detect a new acronym on the horizon... USAAS.  Can I post that? UH Hum.  United Sporting Arms Aquisition Syndrome.  Seems more than just a few of us enjoy these SA rascals.  It was my searching Supermags awhile ago that helped stumble on the USA revolvers in the first place.  So for me DW has a large part to play in my toying with these SA's.

Charger,  Sig Himmelmann's son had been posting on the Firing Line Forum and was open to talking about the Seville's  I has dialog with him once or twice.  His father was the one in Lee Martin's article.  You could learn alot from him likely on your rare pistola.

There has been a .44 Eldorado for sale for awhile on GB if someone else wants to join this subsidiary of DWF!

Charger, glad to see you got that. I watched it for years, when the guy had a $2000 reserve on it. Also thought that was way too much for a gun that looked well worn in those pics. I kept it on my watch list forever, to see if someone would ever go for it, then quit watching it. I sure wanted it though. Now you have it.

I'm guessing that only 5 were made for silhouette, due to the excessive recoil of that round. USA knew the weight limits for IHMSA, and with a bigger hole in the barrel and cylinders, the gun would weigh less than the .357 Supermag Seville. A long-standing safety rule of silhouette, is that the muzzle cannot be allowed to go past vertical in recoil. That might be what limited those 454 Magnums...I've seen .44 mags with wood grips flip that much. The pachmayrs help somewhat, but even my Freedom Arms .41 mag will come close with a loose grip on it. Also, the cartridge is a bit much for 40+ rounds of silhouette...that excess power is just not needed.

So you're saying I should hang onto it when I pull the trigger?

I knew it had been on GB for a while, but had no idea that it's been there for years! I agree that $2K is way too much, $1K is really pushing it. I guess I came along at the right time, which is rare in my history. The guy did seem surprised when I asked about it, and when it sold, he was out of town & didn't even check to see if it had sold until a couple days later.

I'm sure you're right regarding why the gun wasn't more popular. I was just guessing because of the barrel's girth.

I promise to give it a good home & treat it better than it has been in the past. Poor thing was dirty.

If it's any consolation, it does have some small pitting at the end of the barrel for some reason, like a damp rag was wrapped around the last inch or so, for an extended time. I'll buff out what I can, but won't get too crazy on it.