Another one of my passions is single-action revolvers. It's too bad Dan Wesson never got into the act, I think they would have made a great one. One company, back in the early Dan Wesson days, did make a great one…United Sporting Arms. They made revolvers in both regular cartridges and extended frames for the Supermag series. The Seville and El Dorado were their offerings.

The first one I picked up was this Seville in .357 Supermag. Of course, since my first Dan Wesson was a .357 Supermag, I just had to try that out in a single-action. 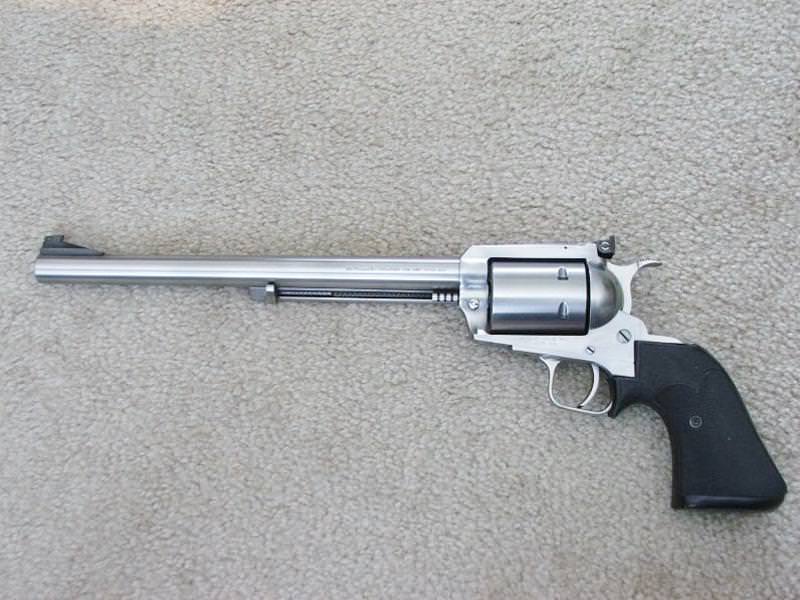 These may look like Ruger Super Blackhawks, but they are near Freedom Arms quality. Dimensions are tight, barrel/cylinder gap is 1.5 thousandths or less, and each one came with a factory trigger job of 2 pounds or less. Sights were very repeatable, made by Iron Sight Gun works. Wood grips were also offered, and each set was custom fit to the particular frame. These things are accurate!

A side note: This Seville was owned by Dave Wolfe of Wolfe Publishing Company, who produces the Handloader and Rifle magazines, among others.

Apparently, as with Dan Wesson, the U.S.A. company had it's share of turmoil regarding company ownership & manufacturing plants. Still, from what I've read there's probably 95% positive feedback about them & would really like to land one (or five

Cool gun, thanks for posting about it.

How are the factory sights on it, good?

The factory sights are good, repeatable, but as on many of the ISGW sights, there are "soft" detents.

Here's an Eldorado in .44 Magnum, my second Sporting Arms revolver. 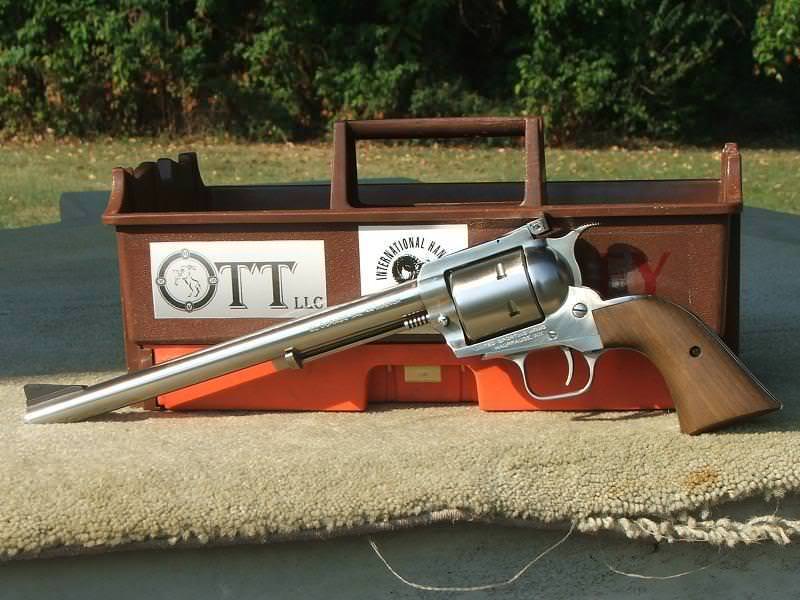 In this older picture, you can see the difference in frame size and cylinder length between the two. 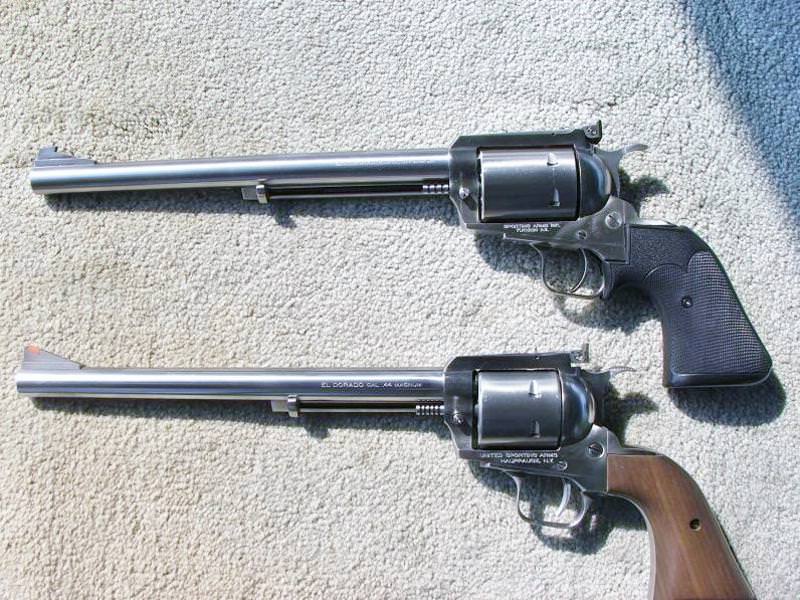 Is your gun safe the size of a 2 car garage?

Thanks for posting the SA's.  I possess one of them as well and it is a great joy to shoot.  Mine is a 375 USA aka Supermag.  The story for these is a tale in itself and I am sure you have seen this article by Lee Martin

It is great reading for those interested in this manufacturer.  If anyone ever has to get them repaired JD Jones at SSK will work on them.  He worked on mine.

Is your gun safe the size of a 2 car garage?

LOL, it is only one safe, a regular 14-long gun with extra shelves, I think 30″ wide by 25″ deep. Man, think of how many Dan Wessons you could put in a 2-car garage size safe!

I just found a .375 Seville in January, had been looking for one for a long time. Of course, it is the Silhouette version. 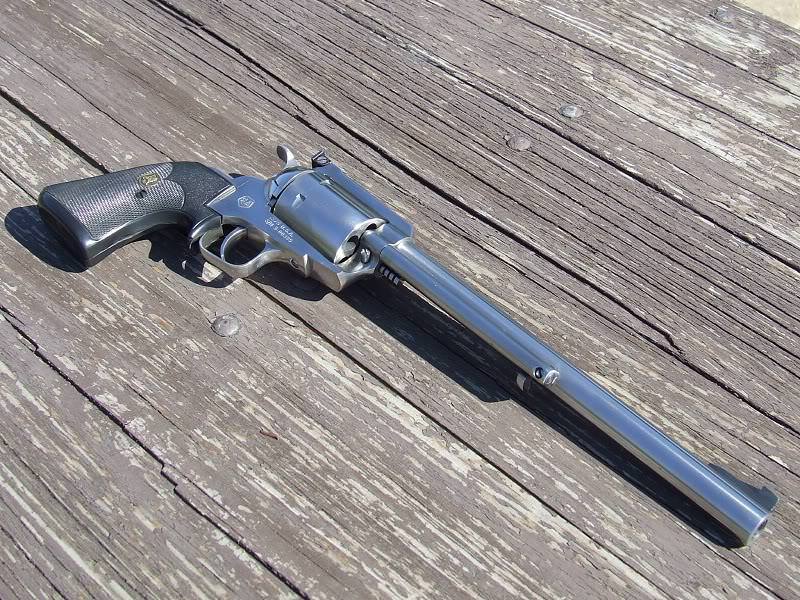 We had our first silhouette weekend of the year, March 21-22, and I had intended to put the first shots downrange with it, but just didn't get to it during the practice day. There was a lot of projects needing to get done, which will take a few days to get to all of them. I sure like my Dan Wesson .375, so I know this will be enjoyable also. This one also has the IHMSA logo on the topstrap. 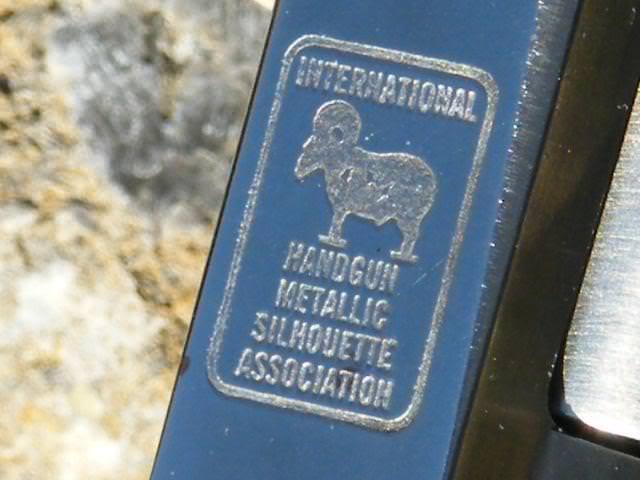 I've been on Lee's site a bunch of times, it is a good one, and also on his forum.

Those are some very cool toys.  Did they make one of those in 445 SuperMag?

SMF, that's a great link, thanks for posting that.

It's going to take a while to read through it, but it's very informative.

And IHMSA produces pics of yet another beautiful piece of fine lookin' firearm!

Those are some very cool toys.  Did they make one of those in 445 SuperMag?

There were a handful made in .454 Casull, which they called the .454 Magnum, for IHMSA. There has been one on Gunbroker for a couple years. It is well-used and a bit too high.

This is an El Dorado version in .22LR with dark rosewood grips. 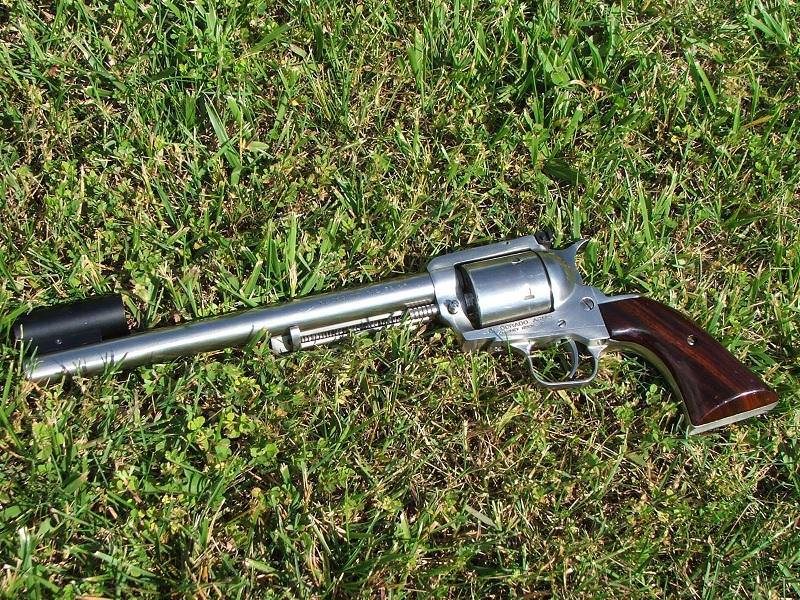 A Stainless Seville in my favorite revolver cartridge (outside of the Supermags), a 6.5" .41 Magnum. 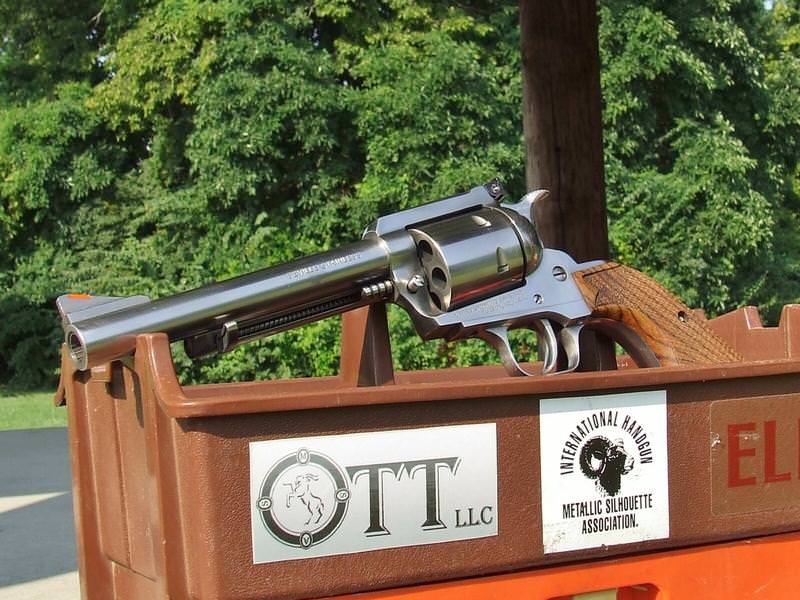 And my ultimate piece-de-resistance, a blued Silhouette Seville in .41 Magnum. I searched for years to find this one. The Seville bluing rivals that of the Dan Wesson and Colt Python. This one has the "Barney" look also…the grip frame, trigger and ejector housing have a very nice plum color. 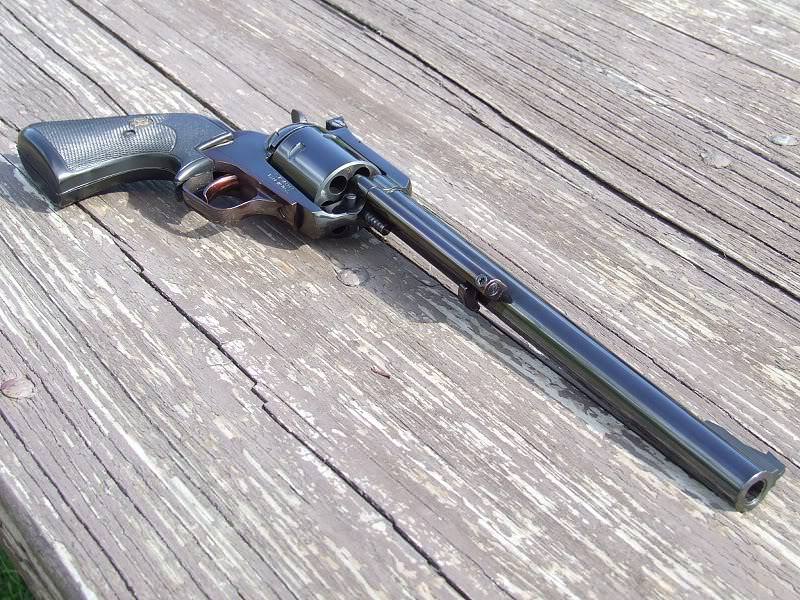 Very cool!  I never knew the Seville's were offered in 41 magnum!  Another search now,  SAS (Seville Aquisition Syndrome) darn another disease to carry but guess that disease is not allowed to proliferate here

I dunno...I think it's proliferating by itself, because now I really want one!

IHSMA, all your guns look practically brand new! You've obviously got the art of the shine down to a science with your stuff.

I've been wondering about your Bomar sights. Did you buy a bunch of those when they went out of business?

Thanks guys, I do try to keep them clean and polished, but they are not safe queens. They get shot quite a bit each summer.

As far as the Bomar sights, I wish I had a truckload of them. Bomar went out of business very suddenly, when the owner was killed in an accident. The sights just dried up quickly. I have a few extra ones for XP-100's, but I need some for Contender barrels, and Dan Wessons...good luck finding any, they are hoarded like gold.

Champion sights have come out with a replacement, built as well or better than a Bomar, but as of yet, it still isn't available. Their website doesn't list it, but it hasn't been updated since 2006. Cost will be about the same as a Bomar.

I remember back in the 82-84 Iron days the Seville was the "Other Gun" that you would see as a Regular Revolver winner in the monthly Gates Paper.  I had thoughts about one... but the price tag was the issue with 3 kids and my 41 Dan with the 8 inch was more accurate than me anyway...  still is !

This is my single action treasure, not quite along the same lines, but to me a real treasure and it is a SA!

[Image Can Not Be Found]

[Image Can Not Be Found]

The 52 is a classic pistol, I have never heard of one that was not 100% accurate, and they sell for a premiuim whenever one is available.

Is that one wearing trigger shoes? That's a fine lookin' shootin' iron.

Yes it is, wearing trigger shoes. I read somewhere that taking this gun plinking is like wearing a tuxedo to a barbeque. I can count on one hand how many times I wore a tux.... and they all were to barbeques!

Palo - that is one sweet SA Smitty.  Nice pics too!