I am a gun enthusiast from Hungary. This week I picked up a great DW gun, but I just couldn’t identify, what was I bought. Somehow, I just can’t find any photo about my revolver and I also couldn’t find the item in the DW product line. I post some photos taken from the pistol.

Please help me: what kind of beauty I have? 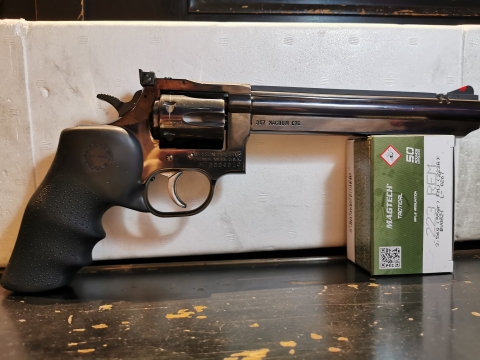 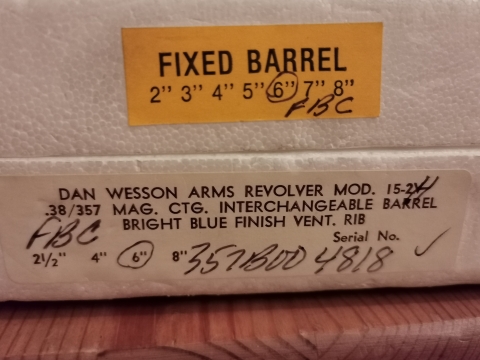 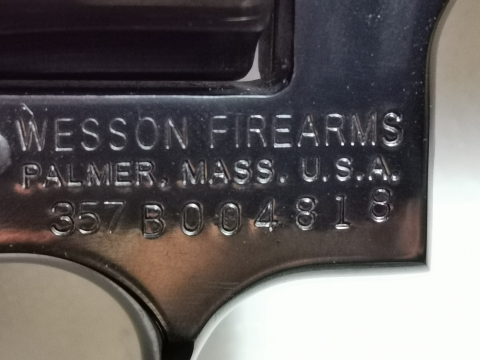 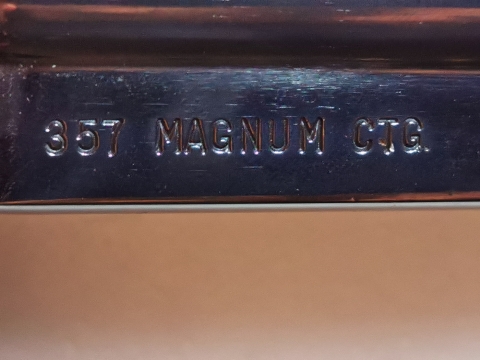 Hey there Mr. Maxis in Hungary.  Nice gun you picked up, especially that it still has the box with it.  One of these does not show up very often.  The information about the gun is on the box label.  The model is 15-2H, the “H” denotes “Heavy Underlug”.  You will also see that the label has “FBC” written on it.  This denotes “Fixed Barrel” and “Compensated”.

If you do a search for “fixed barrel” here on the forum, you can find some photos and information about it.

Good luck with it and let us know how it shoots.

I tried to make a research about this gun on this forum and I found many informations and pictures regarding to “fixed barrel” pistols. What I saw, none of them was compensated.

Is it uncommon to be “fixed barrel” and “compensated” at the same time? Can I reach any link, info, anything about this?

Next week I will test it, so I can’t stand still! 🙂

Here’s a thread with a stainless FBC like yours….I wouldn’t call it rare, but let’s just say they don’t come around very often.

Very nice find! Very few of these out there. It should be nice shooting.

I would call it rare. But I am cont-rare.

Hell Maxis- I spent some time on line searching for DW fixed barres six inch compensated – and came up with zero. Maybe old Dog has better resources, he know his stuff.

snake-eye said
Very nice find! Very few of these out there. It should be nice shooting.

This gun is just awesome! 🙂

Ole Dog said
I would call it rare. But I am cont-rare.

I saw an item like this for sale, the seller mentioned this gun as a rare gun, produced less than 20 pcs of this. Can it be true? I just don’t beleive that I found an ultra-rare revolver like this in Hungary. There is not a good selection here…

I bought my revolver for $480 equal Hungarian Forint, I think I made a good trade.

photohause said
Hell Maxis- I spent some time on line searching for DW fixed barres six inch compensated – and came up with zero. Maybe old Dog has better resources, he know his stuff.

Consider that the fixed barrel guns were only produced for a short few years. You have a rare one indeed.

Ole Dog said
Consider that the fixed barrel guns were only produced for a short few years. You have a rare one indeed.

Thank you very much!

I know the V.P. from Dan Wesson who caused them to create fixed barrel guns. His territory was “the world” outside of the U.S. Lots of countries would not allow the sale of a removable barrel, only fixed. So to help his sales, they all sat down together and reversed threads and waa-laa, he had something to sell! He also was sent to all the IMSHA matches accompanied by a DW gunsmith to fix anyone’s Dan that went down during competition for free. Dan Wesson was nuts about owning and backing the best shooting revolvers in the world and he did not spare money to keep his competition shooters happy. Don’t quote me on this, but I read somewhere a few years ago that all the revolver class competition shoots in the U.S. were won by Dan Wesson’s a bit over 80% of the time.

Your revolver is very rare. And as previously quoted by another member, having the box is a huge deal! Shoot it….you will be amazed! And I will be looking for your experience after your introduction to one of the finest firearms ever made on the planet!!