HomeForumRevolversRevolver Checkout: How to Tell if a…

Revolver Checkout: How to Tell if a Particular Specimen is any Good
Page: 123

The Inspector
Somewhere between 9th and Main
Member
Members
Forum Posts: 32
Member Since:
May 23, 2012

jfred said
Good info, I am going to look at a .357 today.  Will be my first Dan Wesson.

Cool beans! Don't let it get away and take pictures please if you get it!

Also look at the bottom of the top strap right over the barrel cylinder gap. Over time, a gun that has been shot a lot will develop a groove that's cut from the hot gas escaping from the gap.

This is a good way to tell if a gun has had a lot of rounds through it. I have a 744 that has seen thousands of rounds of IHMSA action, and the groove is a few thousanths deep, but still safe.

I'll post a pic once I figure out how, lol.

Very useful, articulate and easy to follow advice, thanks Jody!  After running mine through the inspections I found a few things.

#2 - With the gap set to .006, I discovered that when you hold the gun in shooting position the cylinder falls slightly where the gap closes at the top and widens at the bottom.  What would be considered normal here and what can be done to rectify this issue?

Thanks in advance for your advice. 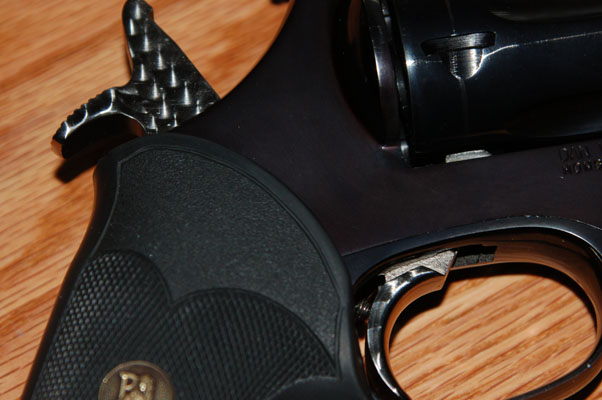 That is a very good and informative post. I wish I would had seen this sooner before getting the DW 14-2, which I still do NOT regret purchasing.

These are good guidelines to further assess the condition of both my revolvers (Dan Wesson Model 14-2 and Taurus Model 65). And again, thanks for the information.

This is REALLY great information. I was going to ask how crucial the .006 gap was because I was concerned about getting too close. What I mean is that after tightening the barrel I can still get the feeler gauge between the cylinder and the barrel, but, it was a pretty tight fit (which usually I really like, but, that's getting off the subject

). Anyway, I'm glad I found this thread before I asked the question.

.006 is factory spec. I would not go bigger but less is great until you develop a problem with rubbing. Most guys find .002 to .004 works best. Be sure to check all 6 positions as some cylinder faces are not exactly true. Remember that if you set the gap real tight it may start to drag as the gun warms during shooting and or soot forms on the cylinder face. Experiment until you find what works for you.

This is a great, informative guide. I just ran my DW through these steps and it checked out fine. Thank you for posting this.

Thank you for this post. I printed it out and will be going over my revolver just to get used to going through the tests. very informative.

I've been 'slowly' shopping for a DW 357, and this is easily the best post I've seen on how to check out a revolver, any revolver.  Great site!

My buddy who is big time into revolvers went ballistic whe he read this post, so I am posting his comments in the interest of our sport.

.002" for a cylinder to barrel gap is wicket short. I've always been told you want an optimal .005" gap and up to .008" is acceptable. And I don't know where this guy is getting his info since a repair directly from S&W several years back told me they accept up to .010" but it's always fun for snobs to bash other brands. Oh, and a .002" cylinder is likely to start locking up on a hot gun or start gumming up from fouling. And if the cylinder does develop end shake and require peening or shimming good luck getting even close to .005" unless you are going to have them pull the barrel and turn it down some which ain't cheap.

His talk on double action trigger pull is enough to make me not want to finish reading this. That's not even how you are supposed to use a double action trigger where you hold it at the end but whatever. Depending on the brand you can tell by feel what parts may need adjustment or replacement. That's pretty much it. Too tight, too sloppy, either way something needs to be adjusted or replaced.

Cylinder lock up with the hammer locked back should only have slight rotation movement and I mean slight. The stop notches should positively hold the stop protruding from the frame. The small opening in the frame for the stop can be battered over time and a wider stop may need to be placed. I've not heard of welding up the frame but I suppose it could be done. The cylinder may need to be redone for the new stop or replaced if the stop notches are too beat up. Forward and backwards movement of the cylinder during lock up is cylinder end shake. Again it's either peened and trimmed square or shimmed to bring back to tight lock up again which will open that barrel to cylinder gap on you.

Yes, if the screws have been buggered up that's usually a big sign of a non or bad gun smith opening up the gun. Step away from the Craftsman screw drivers. Also, check on a S&W's strain screw. People like to think that's for adjusting the trigger pull and will back it out which then means it likes to come loose and back out a little more over time.

He's at least right about hammer push off even if he doesn't know that's what it's called. Remove too much of the shelf from the hammer trying to polish it down and you can now push the hammer off the sear which you seriously don't want.

And any write up that starts to sound like a lawyer makes me want to throw up a little in my mouth. Everyone likes to bring up the Ayoob report. Has anyone actually read it to the end? The whole thing went no where. Which is where and modified gun, hand loaded ammo, or anything else has ever gone. Unless you do something really freaking weird like carry explosive tip ammo or something there' no normal hand loads that will get you in trouble, theirs never been tuning done to a gun that made it more lethal, and none of it has ever gotten anyone in trouble in court. Now do something unsafe to your gun and have a negligent discharge is a different story.

I question Jim March's knowelege because I'm not an expert and even I seem to know more than he does.

Actually, some guy named "woodgrips" with a long and rambling rant, objecting to ???, and with no direct connection to the Dan Wesson Forum, posted secondhand to what was a topic over a year old?

Frankly, without some direct attribution to the Author, and a compelling reason to have it published on DWF, this "information" seems meaningless.

I just bought a Model 15 and Model 22.  They have probably not been fired in years, though they appear to have been properly stored.

I am getting ready for their maiden voyage at the range with me.  I have run a patch through the cylinders and barrel to put a little oil in play, but have not done anything else.  I have noticed the cylinders do not spin freely.  I do not notice any issue when dry firing.

When I return from the range I intend to clean them.  I have accessed a couple of YouTube videos.  One only addresses some lube on the trigger/hammer.  The other breaks the firearm down to parts.  How far is the suggested disassembly for cleaning?  On my Smith revolvers I always get down to removing the crane and cylinder, and every third cleaning or so remove the grips and check the springs.

Any suggestions or guidance?

The Average Joe tuneup is your best guide to a good cleaning and overhaul of your guns.  I'd lube them up and take them out to the range and shoot them.  Also, I'm a big fan of 'if it ain't broke, don't fix it'.  You may find that some oil and a basic cleaning is all you need.  I have had very few old Dan's require anything other than ammo to function properly at the range.

I don't see any mention of a way to measure barrel wear. Sure I can buy a $300-1000 bore scope, or I can buy a bore light, but is there a way to quantify barrel wear ? Just the fact that the barrel has no pitting, rust, stray marks, or whatever, doesn't tell me it's worth buying as it coul dbe that every 10th bullet goes astray due to weak rifling.

Are there bore guages ?

my first thought would be to buy gage pins for the caliber your measuring. they are precision finished pins used for inspection purposes. the degree of precision can change the price. the .44mag would most likely be .4130", .4140" anything over would likely show excess wear like .4150 the pins are typically 2" long and would slide the full length of the barrel with out force if the barrel is clean. this is my way of checking barrels of all calibers without spending a fortune. you can get by with two pins per caliber 22cal.-.2160-.2170,357cal-.3460-.3470,41cal-.3980-.3990,44cal-.4130-.4140,and 45cal.-.4420-.4430 these are labeled as minus Z pins made by Meyers and are good but not the very best but are affordable. they should run about $3.00 each. If you only want to check you may find a local tech school or college that would allow you to bring your barrel in for checking. Dayton hope this helps

pops2 said
buy gage pins for the caliber your measuring. they are precision finished pins used for inspection purposes. the degree of precision can change the price.

Just curious Dayton, do you find many Dan's with excessive barrel wear?