I found this neat Dan Wesson model 14-2, 357mag Blued with 6″ barrel It was priced fairly ($489).  It’s a very clean gun, hasn’t been shot much, I’d guess just a box or two of ammo. The machining lines on the front of the cylinder was the main clue. But it has more than it’s fair share of handling marks and scratches. It did not come with any extras or tools or Box…maybe that’s how it was stored? without a box or anything? and got banged around in the safe?
from the Serial #, the date of mfg is likely 1979.

Also, one thing I thought unusual. This gun has a fairly heavy hammer pull.
Meaning it takes quite a bit of thumb strength to cock the hammer. But
the DA Trigger isn’t that heavy, must be a lot of mechanical advantage in the design?
and a big plus, the DA trigger pull is very smooth. The SA trigger is sweet as a S&W. 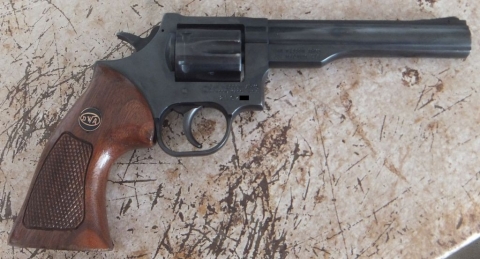 I cleaned and oiled it. The action and cylinder was a bit stiff, due to dried oil I assume?
Anyway, it was much better after I applied some fresh oil and cycled the action.
Then, I brought it out to the range. 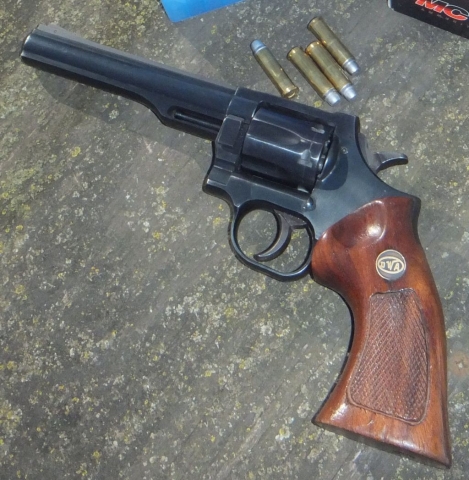 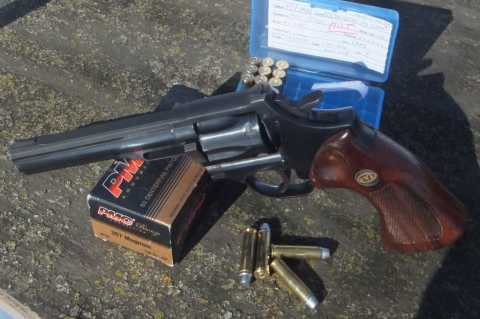 Today, I shot some hot loads of H110 pushing
the NOE 360-160-SWC. The gun liked it and so did I.
I was happy to see that load shoot at point of aim with the fixed sights on this gun. 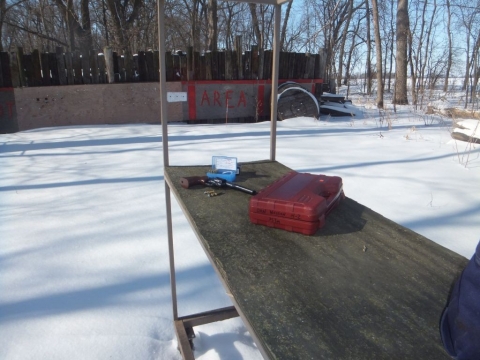 Not the best group, I was shooting offhand at about 50 feet. It was 25º F, sunny and
breezy at my club’s snow covered range. shown are the last 6 shots of the Day,
at the 1″ circle in the corner of the paper target. I had put 50+ rds through
the gun today. 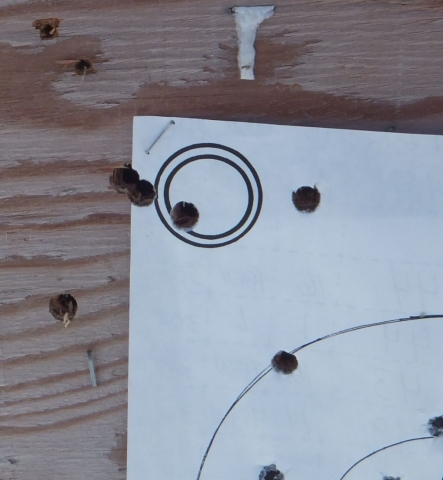 Lastly, upon close inspection, I find the inside of the barrel not finely machined,
meaning there was plenty of machining lines…same with the inside of the cylinder.
My OCD makes me want to polish those areas, but it shot fine, with no lead fouling.
So I will try to leave it alone, LOL.
I checked the throats, five were .3585 and one was .3590 …funny thing, there was a
tiny mark on the one chamber that was larger.
It was a very good day

Step one … follow the average Joe clean-up and maybe put a new Wolf spring kit in.

Nice firearm and a very interesting report, I recently acquired\ a 4″ 714 and have enjoyed every time it has had a trip to the range with my Tanfolgio 9mm. S&W 6′ no dash 686 and my Beretta 87 Target. I find myself using the Dan a lot more than my 686, maybe because it is new to me or maybe I just like it more. My range mates and I have been impressed with it’s accuracy (still getting used to those fixed sights) and the very light recoil especially with the the original wood grips. I’m trying to source a speedloader as my 686 stuff does not work but now know the HKS mod 10-A works. l I am delighted with the revolver and feel very fortunate to find one in such good condition for it’s age down here in Australia as they are not very common. Hope you continue to enjoy yours. Oh BTW mine has a rather heavy hammer pull as well but a nice trigger maybe this is common to model 14’s