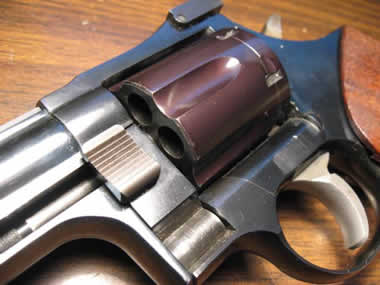 I was viewing some GunBroker auctions today and came across this picture of a Model 12. This picture illustrates the purple tint we sometimes set on Dan Wesson revolvers.  From what I’ve read this is do to the different alloys used and how they react to the bluing process.

I’m sure some of you can describe this in more detail than I but wanted to add it to the forum for any new comers that might have the question.

It’s not a phenomenom that’s unique to Dan Wesson, either.  I have a couple of Ruger Model 77 Rifles that have receivers turned almost the same color as the Model 12 in the photo.  And I used to have an old Hopkins and Allen breaktop .32 that the frame was purple but the cylinder was still black/blue.  And, I just noticed the ring on one of my Remington 870 Wingmaster barrels is solid purple while the barrel is still deep blue.

What you have to watch out for with this in Dan Wessons is mixing and matching barrels and shrouds since then you wind up with a gun that looks like Joseph’s coat of many colors.

Yes, that does occurr to about any and all gun manufacturers from time to time , but mostly is caught in "QC"?? and redone , but it may change ‘plum’ later, after it has been shipped off and out of their hands….this happened a lot in the early years as they were still having ‘issues’ with  their processes as well as the material used in making the guns…heat treat can also "affect" the color outcome..

Rugers, this occurred alot because of their "castings"…….

the problem really is this is also a "sign" that a part or the gun has been "reblued" and this has to be taken in consideration, and looked at carefully to make certain it is the ‘former’ ,NOT the ‘latter………..