I just picked up this 4″ fixed barrel .357.  It’s a Palmer gun, the last 4 numbers of the serial are in the 4000s.  I thought it might be stainless, but reading posts on this forum indicate that it might be hard chromed instead.  I took a chance and applied cold blue to a gouge on the barrel that would certainly have gone through hard chrome and it didn’t take at all.  I’m betting that someone here will be able to tell me for sure though whether it’s a 714 with a fixed barrel or what the correct model number is.  It’s seen use; the finish on the barrel shroud, frame and trigger guard is scratched and it has ejector star marks behind the recoil shield on the left side. The trigger is pretty smooth and lockup is good.

I picked it up from a LGS for a lower price than I would have expected had I not already observed the broken rear sight roll pin.  It was a bit of a surprise, though, to find that the reason for the broken pin is that the rear sight roll pin holes aren’t perpendicular to the frame nor in line with each other.  The right side hole was at least 0.030″ aft of the left side.  I wound up milling the pin hole in the rear sight towards the rear to allow a pin to pass through the sight and the misplaced hole(s).  I cut a new pin from an old 1/16″ drill bit, tapped it into place and staked the holes on both sides to keep it there, then secured the sight screw.  Hopefully that will last for a while.  If not, I have a sight pin on order.

Luckily, I intend for this to be a shooter, so the scratches and “redneck engineering” to fix the rear sight aren’t an issue for me.  I should be able to get this one out to the range in a couple of days and we’ll see how she shoots. 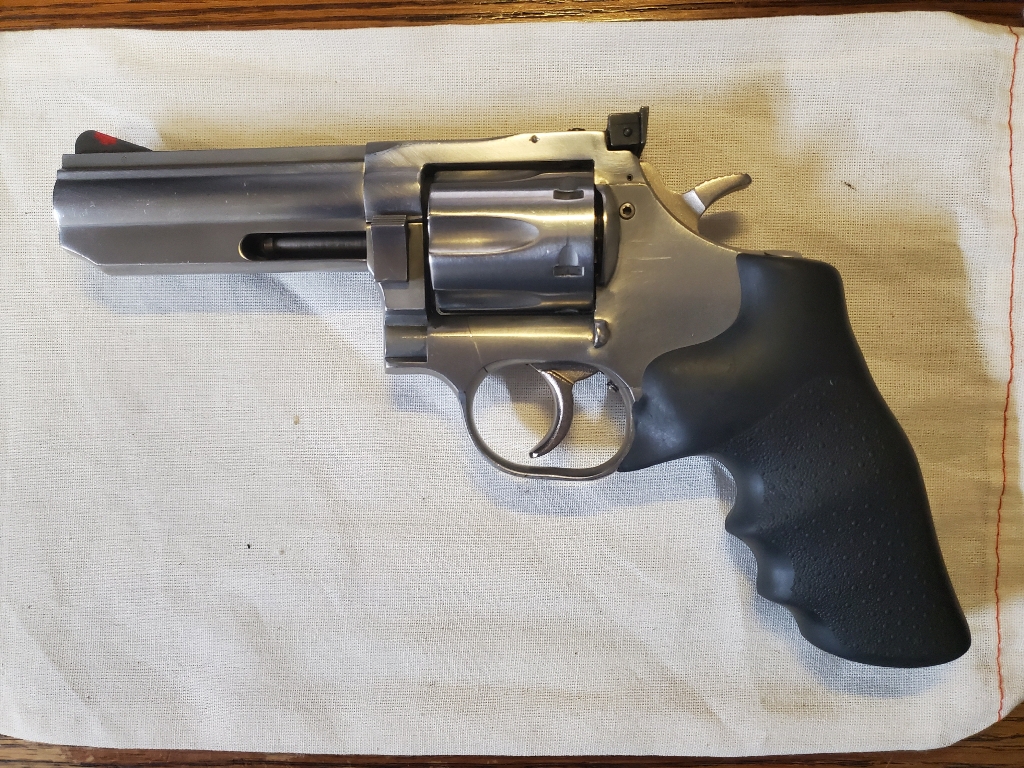 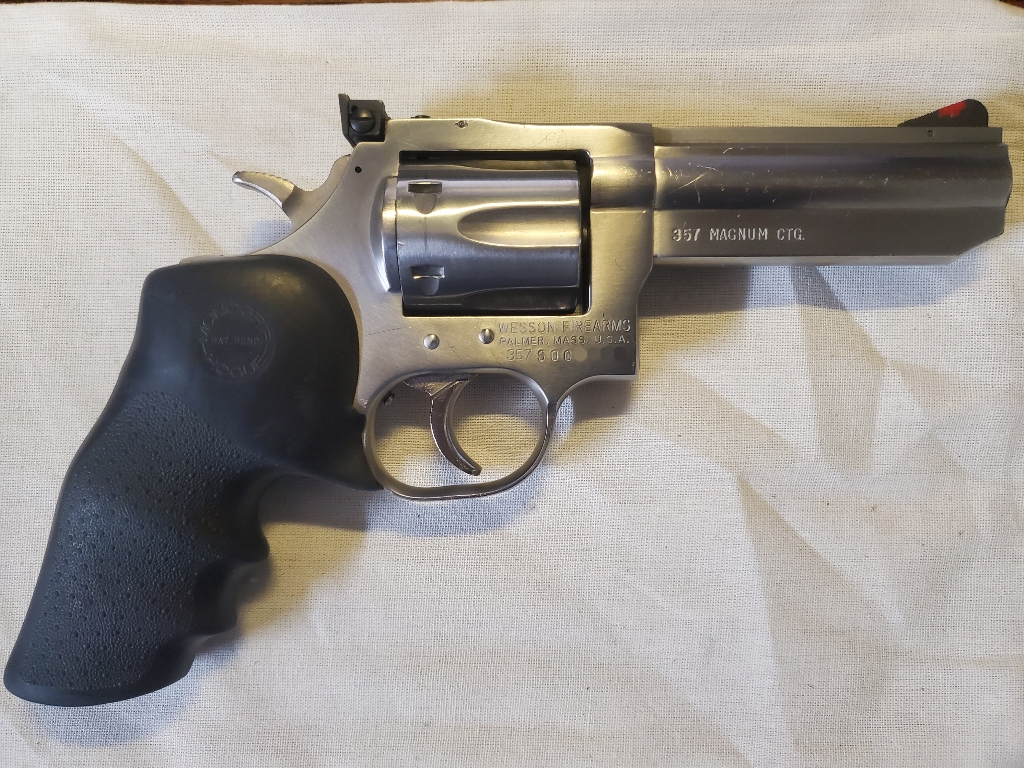 I am sure it is stainless. Very handy of you to fix that rear sight. Plenty of threads here about removing scratches.

Model is 715…  That’s the first time I’ve heard of the rear sight roll pin hole being misaligned- glad you were able to address that.  Now get out there and shoot it, followed with a range report. 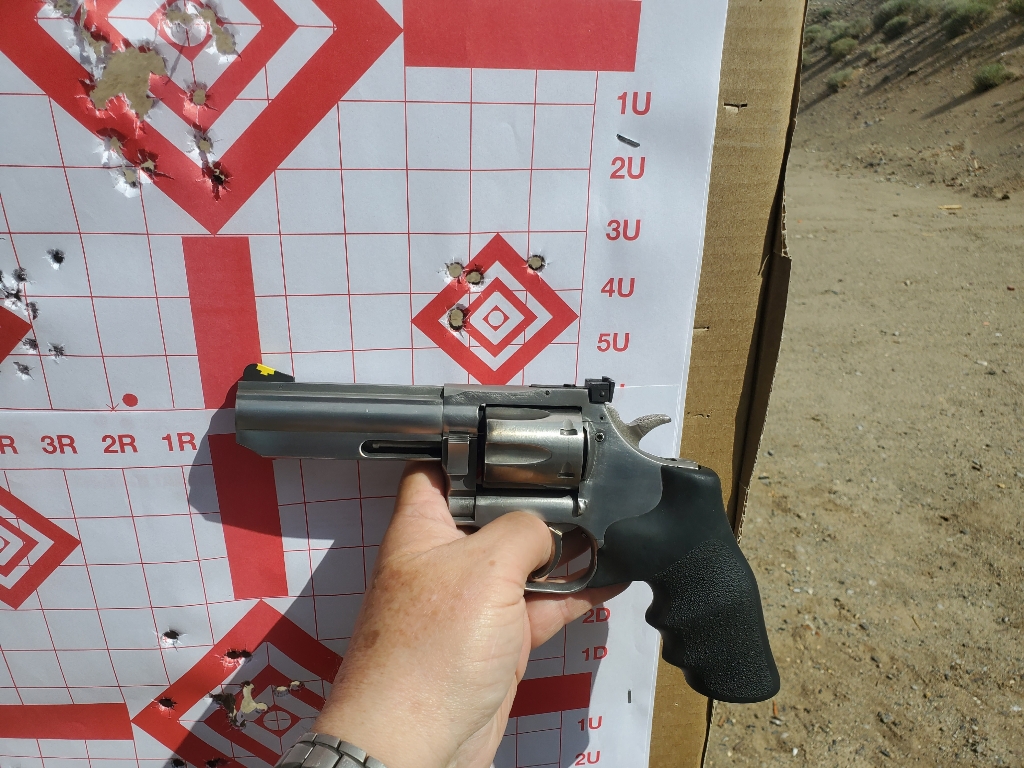 6 rounds of Hornady Custom .357 158 gr. XTP.  The group to the upper right of this photo was fired with commercial reloads, .357 158 JSP, no label on the box and I’ve had it for some time – clearly, the DW didn’t like it as much as the Independence and Hornady: 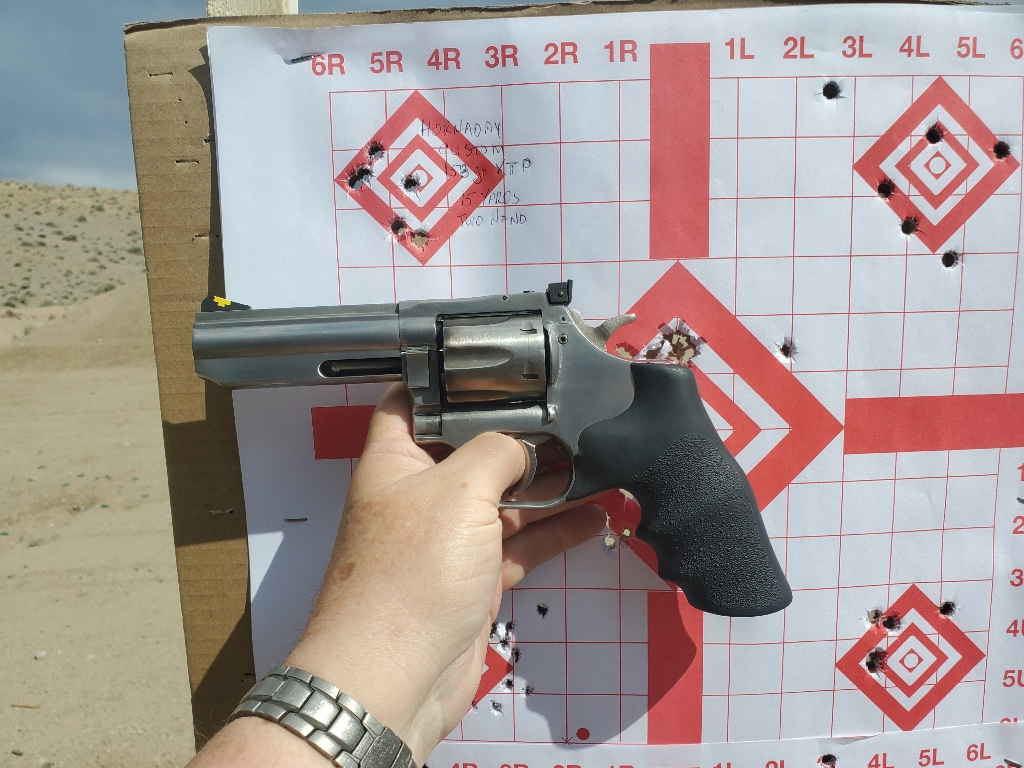 No issues other than one failure to fire with the old commercial reloads.  There was no mark on the primer, which leads me to say that I probably short stroked the trigger in double-action.

As might be expected, recoil with the full-house .357 loads was easily manageable.  I could have gone on all day… if someone would only pay for the ammo.  Recoil with assorted .38 125 +P was, by comparison, laughable – like shooting a .22 (which is actually a good comparison as I did, having a new to me S&W 17-4; you can see its group in rapid fire partially hidden by my hand above).

I have to say that I don’t like the yellow front sight insert at all.  It was very hard to focus on.  I have a fiber optic front sight on order from EWK, hopefully that’ll be easier for my grumpy old eyes to focus on!