This conversation was started in the Auction forum but I thought I would post my comments here in the Revolver forum.

I was under the impression prior to seeing this gun that the new style of compensated barrels and shrouds did not start until Palmer production.  The shroud also has Dan Wesson's signature included on the end and 445 SuperMag is stamped on the side of the shroud.

So I guess this type of Shroud may have starting production prior to the move to Palmer... any thoughts? 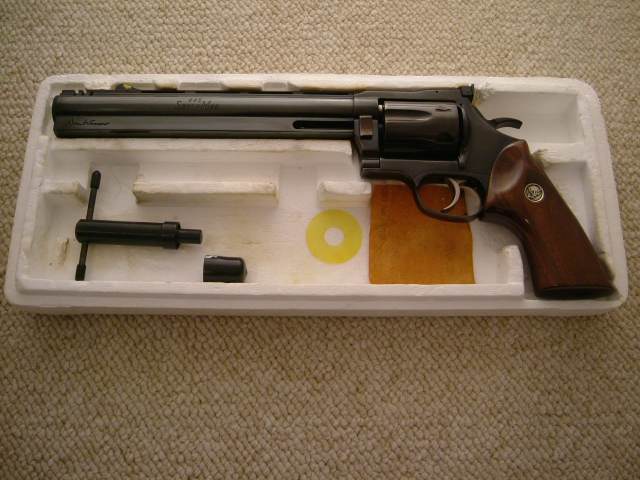 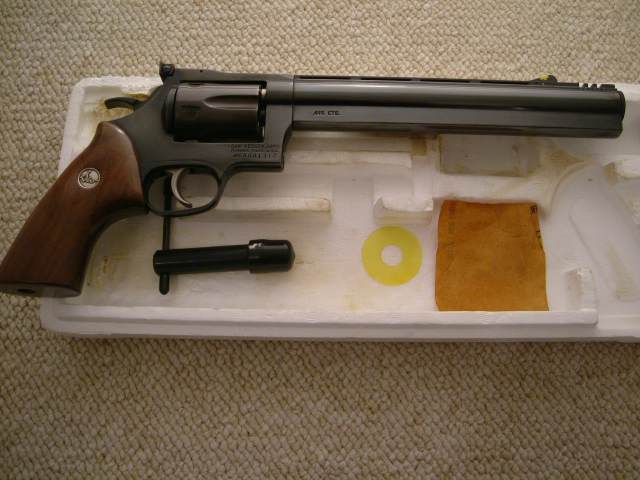 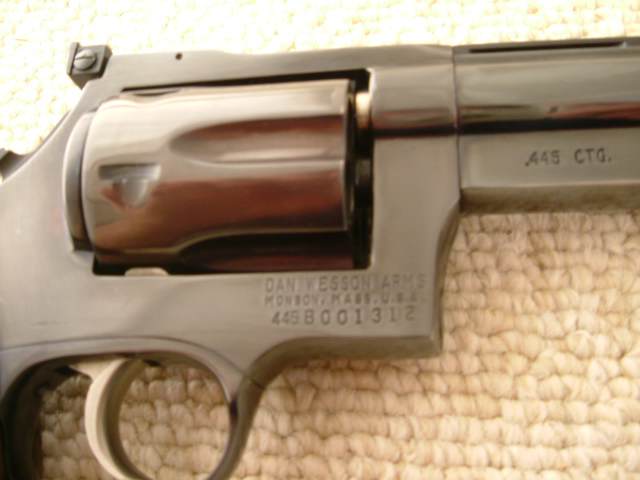 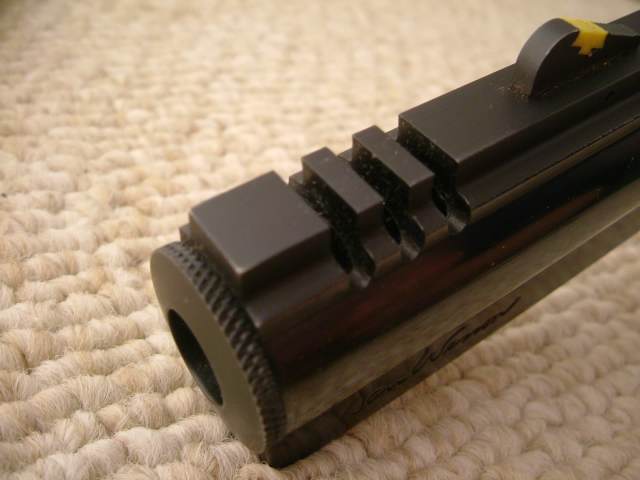 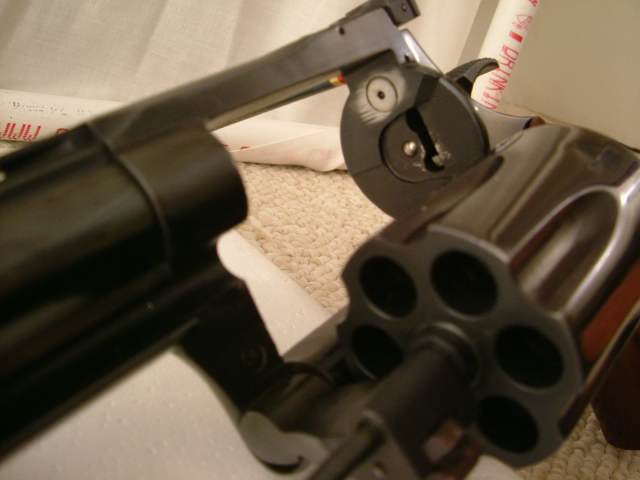 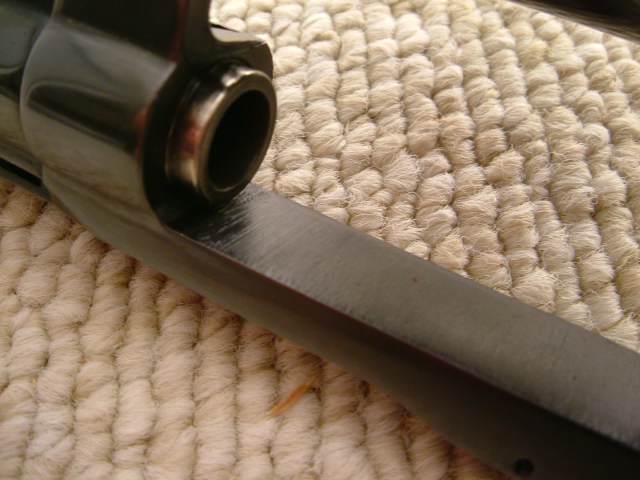 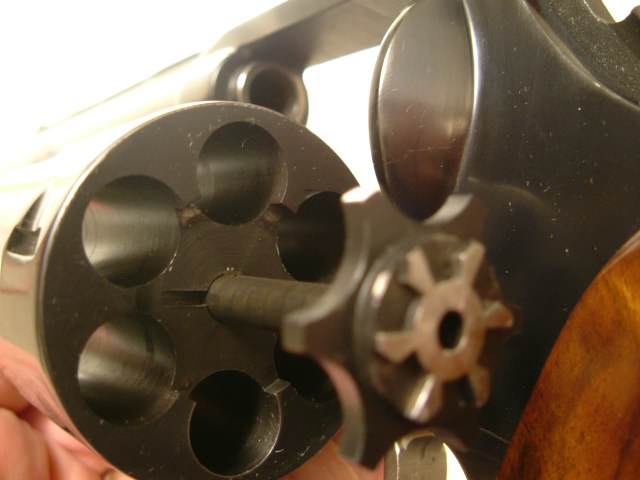 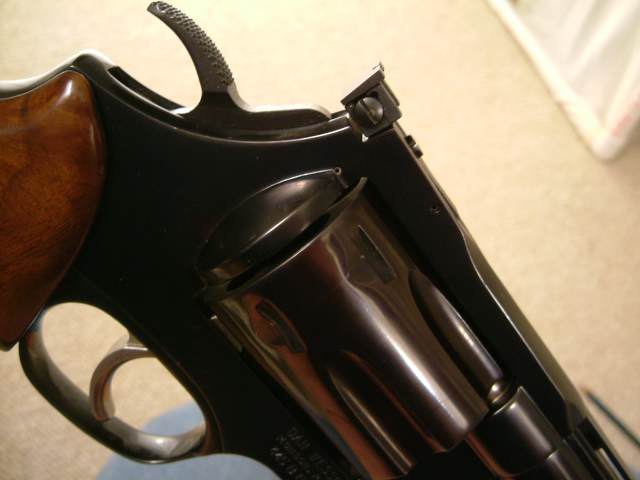 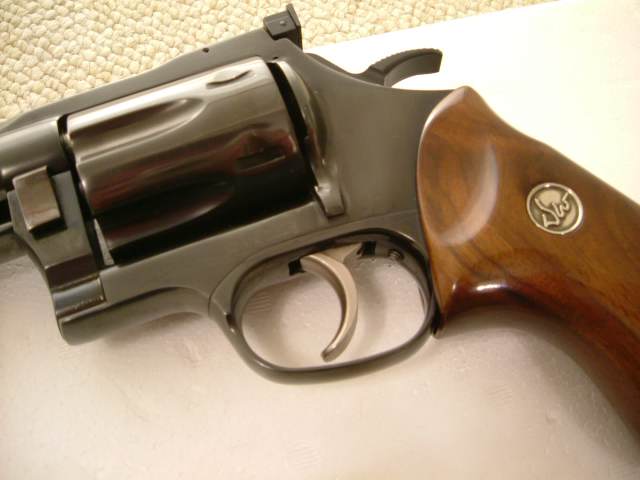 Here's a link back to the discussion in the Auction Forum.

Jody, I am with you on this one.

I too was under the impression that the newer style compensated barrels didn't happen until Palmer. I have no proof to support this theory though.

My 7445 compensated is a Palmer with a low serial number. Thankfully, I haven't noticed any lack of QC between this Palmer gun and my Monson models. In fact, this gun has tighter lockup and has no fitment issues or rough edges, except for 1 small issue- The grip is a little off. I figure I will swap a grip and see if it was a bad day in the grip shop or whether there was a slight change in frame dimensions. There is the slightest gap between the upper part of the grip and the frame. Also, the grip rides a little higher than the frame. I suppose the grip just could have been overtightened at one time and has caused the grip to be elevated by about 1/16" potentially causing the upper portion of the wood to spread a bit.

I wonder if this blued one could be a prototype that was made shortly before the Monson plant closed?

I'm wondering if someone bought that shroud and barrel during the Palmer era and replaced the original... If you notice in the 3rd photo it is stamped:

My Monson era SuperMag is stamped:

Obviously I have know way of knowing if this is the case or not.  I would like to know if there is any model number info with box.  I'll email the owner and see what I get back.

That would be the first Monson model with that comping that I've ever seen.  The Monson models all had the ported barrel with the slots on each side of the front sight.  I've seen many ported DW's offered at gun shows and have not seen any from Monson with that comp, as an original setup.

Sounds like Jody may be onto something then. That shroud may very well have been made later on.

I'm wondering if someone bought that shroud and barrel during the Palmer era and replaced the original… If you notice in the 3rd photo it is stamped:

I can't confirm much of anything, but I can say that my Palmer barrel is stamped the same as above. It also looks identical in all other respects when it comes to the scripting, etc..

I'll second that too. The Palmer guns only had the cartridge name on the shroud...no factory name. Looks like a replaced barrel/shroud and if you look close, you can see flame-cutting on the top strap.

I saw this "Monson" gun on GB and also thought that must be a Palmer shroud.

Somewhere in my memory I remember the scripted "Dan Wesson" on the shroud as being a product of the "new Yag laser" that was installed in Palmer - meaning that the shroud cannot be from Monson.  I'll try to remember where I read that and post it up.

I think it's another mix n' match - nice looking though...

Also the wear around the firing pin doesn't indicate an unfired gun either.   It is a nice looking combination though.  I would like to have one of the shrouds with Dan's signature lasered on!

One other thought... what would be the benefit of the 10" compensated barrel.  I would think the weight of this one would keep recoil down...

I'm guessing a mix-matched gun; possibly reblued for resale?  There is no Barney showing through on the frame and very little wear in the crane pivot area as compared to the face of the firing pin area...  just a guess though- I'm no eggspurt.

It's still a nice looking firearm, just not worthy of top-dollars like so many are going for these days.

Personally, I thought that barrel style didn't show up until the Norwich guns, but what do I know?  The one which was stolen in transit to me had that kind of barrel and it was serial number 445S - IHMSA - 12 - Monson Made.

I had watched the gun that was stolen also from GA auction and thought too it was odd that it would have a later model compenstaed barrel on a supposed NIB Monson gun.  Then the auction came up for the gun at the start of this thread and the suspicions continue.  Looks like ther are some potential "rebuilders" out there?  I am no expert by any description either, but with some of our resident experts on the forum I think we have some cumulative eduction happening.  Just my thoughts.

Personally, I thought that barrel style didn't show up until the Norwich guns, but what do I know?  The one which was stolen in transit to me had that kind of barrel and it was serial number 445S - IHMSA - 12 - Monson Made.

This from Bob Serva's brief history of when he purchased the company and moved it to Norwich:

In the early summer of 1996, a group of close friends and I rented fleet trucks and preceded to Palmer, MA to sort through and move all of the items from Wesson Firearms Co. to upstate New York. After getting settled in, we started to go through the old tooling and realized that if we were going to make a product that would measure up to the standards Dan Wesson himself would have expected, we were not going to be able to do it with most of the tired old tooling. We would have to build new. It was time for a superbly designed firearm to have a new birth.

With the help of some tooling experts we summarized the machining processes and it’s applications to new high-tech horizontal machining centers. The first revolvers were shipped in December of 1997 after months of very hard work. We were extremely proud of our first production run. The fit, finish and function of the revolvers were excellent. The newly purchased YAG laser improved the markings and serial numbering of the frames and barrel assemblies dramatically.

I knew I read it somewhere…but this also tells us how big the disparity is between the frame and the shroud…might just be the best of both worlds though!!

Just a thought, Is it possible that the gun is a "last run" Monson frame, assembled at Palmer with the "new" compensating system?  It wouldn't be that surprising to believe that they would just use the left-over frames from Monson, no reason not to.  I think the shroud is almost guaranteed to be a Wesson Firearms shroud, the caliber designation and dan wesson signature are stamped or rollmarked not done with a laser,  in the fashion of the Palmer guns.  I think it kinda does look like a reblue but theres no way to be sure without handling it, the letters don't seem to have the raised area around them like they should indicating possible polishing/buffing.  The only thing that is really weird is that whoever replaced the firing pin bushing didn't at least apply some cold blue to that area.

Edit to my previous post: I was thinking this shroud had actual "scripting" (like Dan Wesson's signature) - must have confused my guns!   Although the Yag and scripting were a Norwich innovation, this shroud is most probably from Palmer...

Ok, going with the idea that the frame was made right near the end of production at the Monson plant...that frame & probably a bunch more ended up in a few boxes of unfinished guns at the time the plant closed.

Packing up and moving an entire plant would be a mess, for sure.

So then the Palmer plant opened, instead of finishing the assembly of the leftovers, they started off by making new guns with the Palmer name on the frames. The leftovers were pushed to the back of the pile until they could decide what to do with them...or maybe they were forgotten about entirely.

Shortly after Norwich opens, someone stumbles on some boxes of half made guns & the decision is made to assemble & ship however many could be completed, so there would be some cash flowing the right direction as the company got on it's feet.

Maybe they had orders to fill, but the machines weren't set up for production yet & this was a good way to fill some orders in a more timely manner.

Of course, they would put that fancy-schmancy new engraving machine to use before they shipped any old stock out the door.

...or else, it's just a made-up gun frome some collector's leftover stash.