Welcome to the forum from PA!!!!

Now, where is Ole Dog for thoughts ...

Mitchell was in charge of High Standard at some point. High Standard made some very nice guns in the past, mostly 22 LR Semi autos. Also DA 22 Revolvers that looked like single action  western style guns. They also made some steel 22 and 22 mag revolvers, the Sentinel mk I and 1V. 9 shot. Then they made the fabulous HS Crusader in 44 mag and 45 colt. Alas, it was too late to save them. In the early 70s, they contracted with Dan Wesson and added rebranded model 14 and 15s to their lineup. I suspect  DW wanted to unload their remaining inventory of porkchops to debut the redesigned  -2s. Circa 1974.  Mitchell was the CEO I think and when HS went under he bought it and renamed it after himself. He carried a number of familiar firearms that he rebranded, among them the Dan Wesson 14-2 and 15-2s. They may be scarce or even rare but they are identical to and made by Dan Wesson. It seems this took place after 1981 because all Mitchells, I have seen have been stainless. There were blue ones too but no stainless were sold before late 1981.

I would value them as they were DWs unless you have to have every gun Dan Wesson ever made. I doubt there are any extra barrel assemblies and Mitchells may be fixed barrel guns.

The Crusaders were not made by Dan Wesson or designed by Karl Lewis. Like the DW Dove Grey 44 mag, they were an introductory release but never went into production. One of the most beautiful Revolvers ever made IMHO. Less than 500 of the 44 mag were made and less than 400 45Colt.

If anyone here knows the Mitchell years, it's Ole Dog.

of your new-to-you Mitchell! 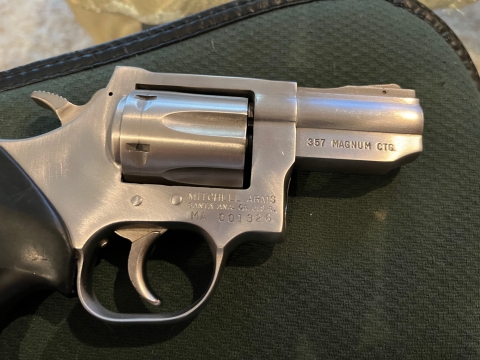 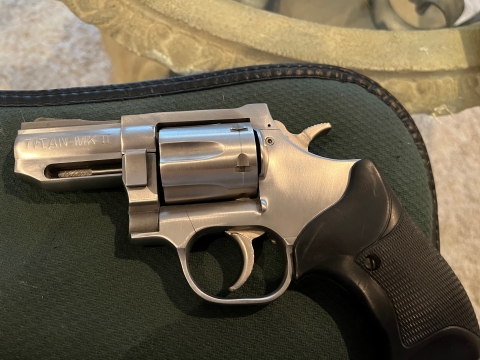 Very Nice! Congratulations and Thanks for the pics!

Looks like a new Latch, but old Extractor Rod and possibly a fixed barrel.

Very observant of you Stinger. Frame mounted trigger screw too. I mentioned 1981 because that was when stainless was made first but I think the DW /Mitchell collaboration started with Palmer Era. I definately remember seeing an ad featuring blue and stainless, fixed and adjustable sight Titans.

I think that is correct Willy.