I have seen the  Dan Wesson Virginia Revenuers on the forum in the past and through old threads and always thought It would be nice to have one because of the history, the uniqueness of them, how the came about and the fact I do not own a commemorative type Dan Wesson in my collection.

I met a gentlemen over the net who had two of them. The story is that his uncle was an agent for the Virginia ABC who had ordered three, one for himself and two for the gentleman's father. They were bought and stored, never fired, in there original serial numbered boxes, papers and tools. The little envelope that held the tool and shim, still has the original staple, never opened. They came in today and they were everything the gentleman had said they were, absolutely pristine condition.

We had been going going back and forth for maybe a couple of months, started late last year. Actually our conversations started out here on the forum, his wife had found the site, and registered as a guest one time. The ironic thing is this, since this was not an GB deal or anything similar, we had talked about and escrow service or even going through his FFL as a payment server since we were two states apart and did not know each other from Adam. As we were trying to figure out the safest and cheapest way to make this type of transaction to which we both agreed, I received a phone call out of the blue two days ago from this gentleman who basically said "Kenn, I'm sending these Dan's to your FFL today, look at them upon arrival and If they are everything you you expected them to be, then you can at that point send the appropriate funds, If not simply send them back."....Yes, I was floored and while lost for words the only thing I could say was " Ok". Never in my life have I purchased anything this way over the net, especially a firearm. In the world we live in today it's nice to know that honest, trust worthy people still exist and it all started from from the DWF, thanks guys, and to the trust worthy gentleman. 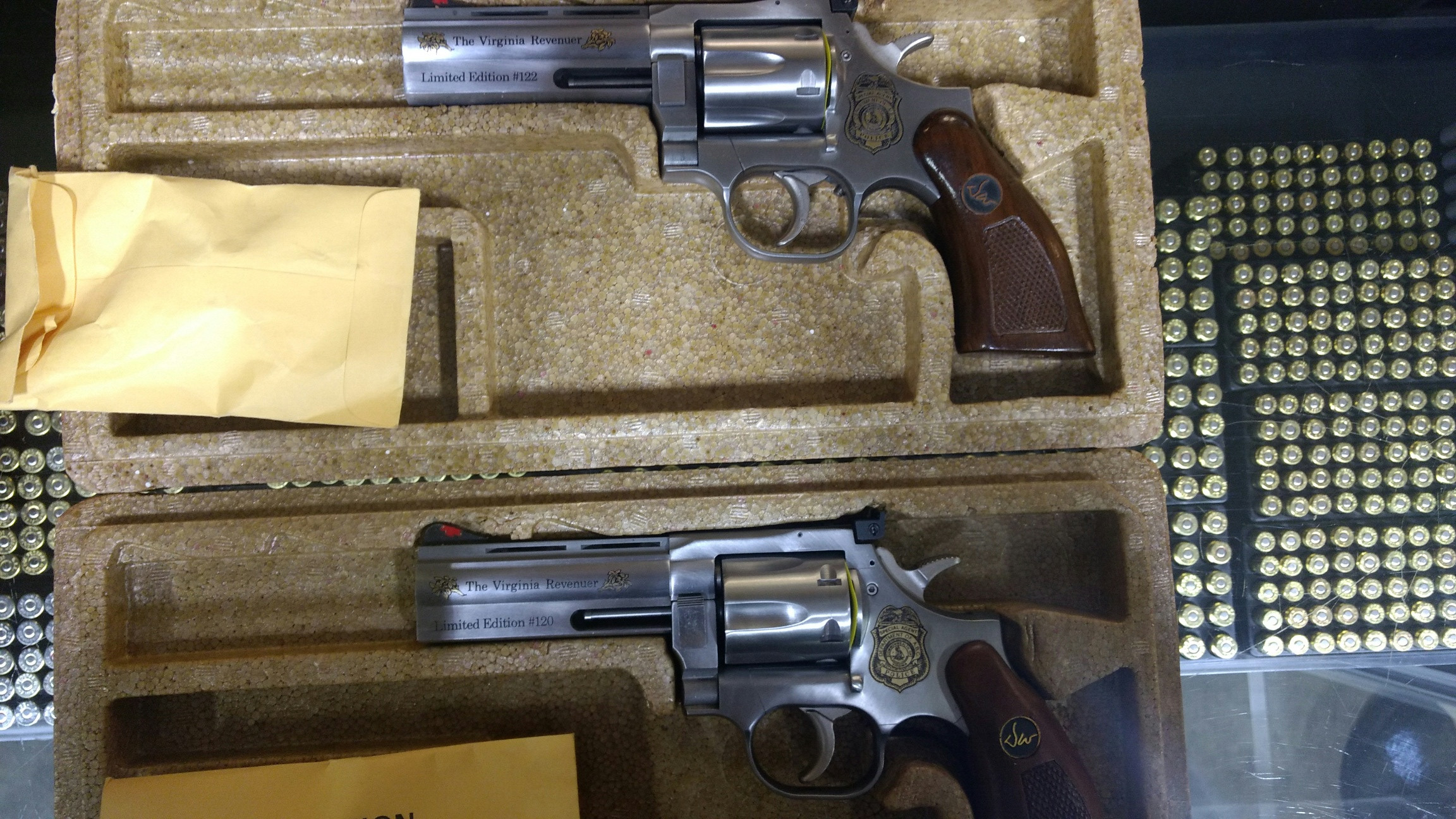 VERY nice score and a cool story on the deal!  Congrats!

Nice find Kenn, can't wait to see one in person !!

Afraid I would have to shoot ONE

Very nice set of revolvers you obtained there.

Great to hear that worked out for the best- congratulations.

I'm wondering does anyone have one of these and has actually fired and cleaned it, reason being is I'm curious how the gold inlay, or etching would hold up under solvent? Not that I'm planning on firing them just curious since these were from the mid eighty's and time has gone by, also I'm sure there are different solvents now then back then also.

My apologies, it's just how my mind works.

On my gold plated uniform accoutrements, I used dish detergent and a micro-fiber cloth.  Some guys used ammonia cut with water- (50/50?).  After cleaning and drying, buff again and then wax. Be gentle- gold plating isn't very resilient.

What an amazing find and an amazing story. Those area a pair of very attractive revolvers!

Thank you for the advise Rwsem, the fact that they are non fired I still feel the need to preserve/clean and give them the proper welcome to the collection they deserve, even though I'll never shoot them. I am as we speak put interest out to his cousin who may have the #121, I thought that would be neat to have also.

That's a nice looking set you came into.  Commemoratives aren't everyone's interest but those are nicely done...a nice addition to your collection.

Wow, that's quite a find! Great story too, congrats & thanks for telling us the tale.