New here, but not to gun forums, Admin one of my own for Mausers. Found this site trying to find the value on some barrels and parts, that I hope to tap the brain trust here for. Unusual for me, I’m usually the guy appraising guns and parts. I’m a reloader, worked on, and built guns for the last 50yrs, that I can remember anyhow. I’m down to two Dan Wessons, a Monson 15-VH Pistol Pac safe queen (only safe queen I own), and a 715VH 8″ that was one of a pair of consecutive serial numbers. Buddy got the other one, and vanished off the face of the earth.

Mine came as the worst joke you could imagine, there wasn’t a part on it that would have got past QC, but the whole gun did! I sent it back with a letter, that may have been rather snarky, letting them know I was extremely displeased, and the guided pig hunt I bought it for, was in three weeks. 3 days later I had a two page letter of apology from the CEO, handwritten and signed, overnight express! Explained they didn’t know how this happened, were destroying my gun, and building me a new one, with my serial number on it. The gun would receive “special attention” when assembled. Two weeks from the time I shipped it, I had a new gun, and a new spare barrel, still have that barrel wrapped in wax paper. This was 1983?, so I can’t count the number of rounds through it, and still shoots like new. Someone spent some quality time tuning it. I was their best advertisement after that!

Mods, I don’t want to step on toes, where on the forum would be best to post some pics for a value on these parts?

Welcome to the Forum from Wisconsin.

Welcome to the Forum. Great story!

Welcome to the forum from PA!

Mods, I don’t want to step on toes, where on the forum would be best to post some pics for a value on these parts?

Either here, or in the “Revolvers” section would be fine.

I loved the story, I’m glad they were able to give you & your 715 a happy ending!

Thank you all for the welcome! I’ve been skimming through the forum, lots of good info, old dogs can learn some new tricks! One of my boys already has his name on that 715, along with a long list of others. I have to remind him, that my will has a “Natural Causes” clause.I’m having a hard time putting a value on some barrels and parts. Done a month of internet searching, and the prices that I could find, are all over the place. Right now, everything else seems to be too. I’m hoping you gents can give me a better idea. These are the sad remnants returned from a theft years back. Friend has had them in a box, and asked if I could sell them for him. Says it makes him sick just looking at them. Can’t say I blame him.The three .357 barrel/shroud assemblies came from a Pistol Pack, the grip may have too. The combo tool is for .357. The barrels from top to bottom are, 8″ SS .357Max?, 6″ SS .357, 6″ Blue .357, 4″ Blue .22, and 2.5″ Blue .22. The cylinder was in the box, it’s a .45 Colt Kirst conversion for an 1858 Remington. Can anyone ID the smaller rectangle feeler gauge? Don’t recall anything like that from DW.rn 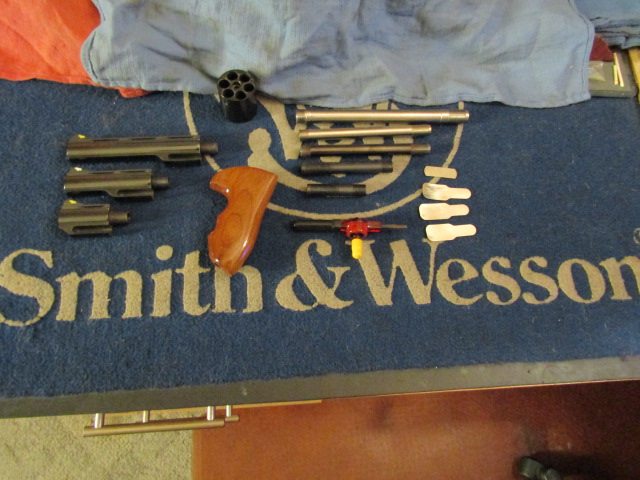 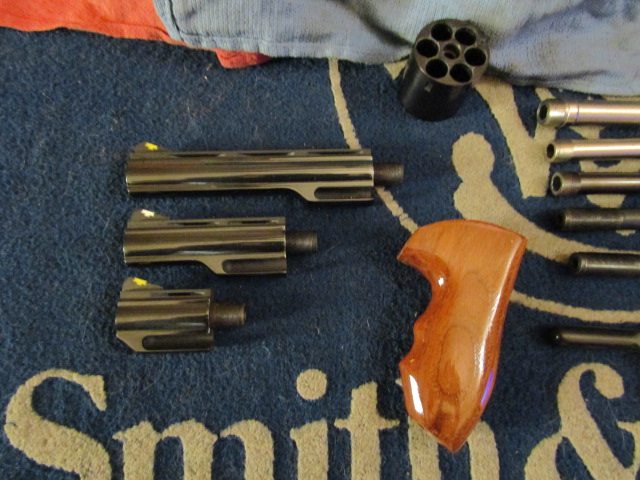 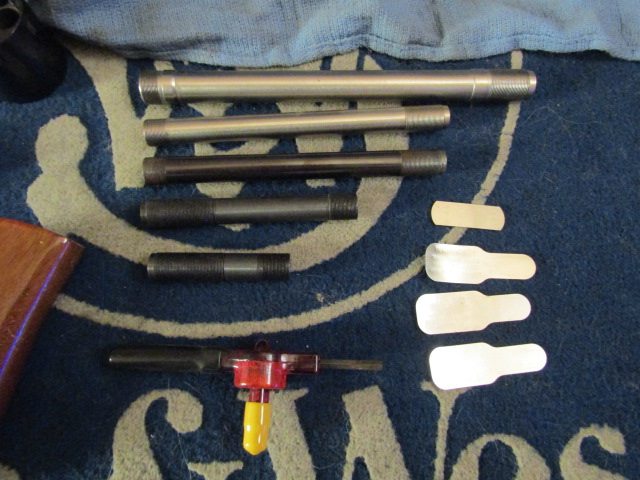 So you can still buy  barrel assemblies from Dan Wesson in 357 and 22 from what I know. I’m sure they will make ones in different calibers but those are a definite as I have purchased them recently. They are around $400 but the stuff on EBay and GunBroker go for a lot more. I’m guessing some people want the older shroud to go with their older gun to be period correct. It didn’t matter to me so I just bought them from CZ. The small feeler gage is from EWK I’m guessing. They make a really nice barrel nut tool. Seems like the original tools are fetching good money too but the plastic is old and I wouldn’t use one unless I really needed to. Again folks like them to complete their pistol pac. Priced over $100 they dont seem to sell fast. I purchased just the barrel from Dan Wesson and it was under $100 for a 10” so the barrels alone are worth probably a quarter of what the assembly would be worth.original combat grip is probably $80 to $150.
im sure folks on the forum would like a shot at buying some if you’re interested. Thanks for sharing and welcome to the forum.

Apologize for the absence, someone gifted me a dose of Delta.

What would be a fair price for everything in the pic minus the cylinder?

Get well trap55. In CA here too, from the Delta. Pun intended. Happy 9/11 one and all. That morning I woke up to the horror you did, and saw another reality: it was now hitting the fan and I had no confidence in my finicky auto loaders. A Springfield 45 super, a Coonan and a desert eagle. I needed a revolver, and I didn’t have one.

i called Dan Wesson. The sweetest man ever; the kind gone now it seems told me something amazing. The truth. He said “I can tell you want DW accuracy and if you find a DW 44 without a sour chamber right now I want to see it! Can I interest you in another caliber?”

I wanted a 44 and really I said with what’s happening I need something fast. I WILL buy, but I need reliability and hunting power fast. He said call when you are ready and be safe.

I don’t want to say what I did, but I moved fast and legally to something my wife could also use confidently.

That marriage ended much in the way the then DW did. But I wanted to keep my word to that sweet man manning the shop, and his honesty. So, I just picked up.. Two decades later have bought a DW 41 from monson with a 8 and 4 inch barrel.

i am a handgun hunter, and successfully used the Coonan and another 44 in hunts, but felt the best would be a power in between.

DWs man suggested a 414 but I was not able to find one to buy. I am sure he would understand.

God be with all of you. Ian

TRAP55 said
Can anyone ID the smaller rectangle feeler gauge? Don’t recall anything like that from DW.

Not sure what to make of post #11…but I’m watching!

I can ID the smaller gauge. That is most likely from one of the first Gen D11 or W12 guns. When I got my pair of W12 PP’s, one had the feeler gauge included with the barrel multi-wrench…it had suffered a wrinkle at some point, so I pulled it out & tried to smooth the wrinkle out. Umm, in doing so, I quickly rubbed off some of the info on the gauge surface!! It was just inked on!   Dammit!!

Anyhow, here is what it looks like today…the wrinkle remains. 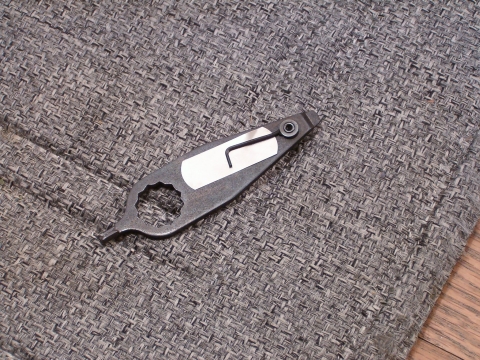 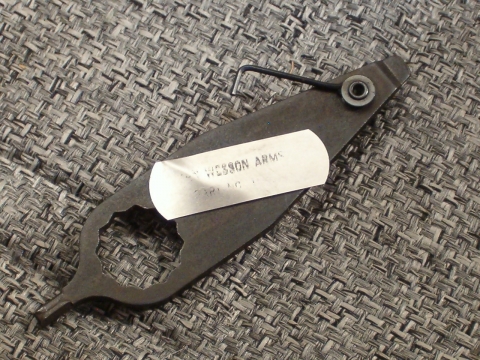 Sorry for the confusion. Trap55s great customer service post sparked my own DW customer service experience, which just happened to be on 9/11. Hope trapp 55 feeling better. I am from the delta area in CA, referencing his delta dose comment. Ian 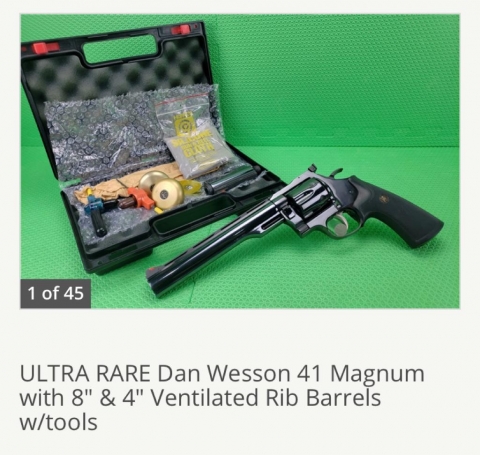 p.s. That photo is pretty flattering. What about a premium reblue ?

Ian, thank you for the well wishes. Tracked the culprit to the 6yr old princess across the street, her whole class got it in 48hrs, and all wearing masks. This is the third time I’ve had it since Jan 2020. First time wasn’t a picnic, and the last two, I’ve had worse head colds. The princess and her classmates were done with it in 4 days, back to school in 5-6. I was done with it in 5 days, but I sure wish my batteries would recharge like hers did!

Charger Fan, this one has had all the ink removed, but I did find some evidence it is DW.

Wow! Get some fresh air Sir! ( Nut Tree still open?) You are wanting to sell a 715 with all these

accessories? I did see you said a .22 barrel was there as well, but didn’t catch you say a .22

gun, just barrel, and these were the remains of a robbery.

Believe me I know the pain. Had our 1903 colt taken from the sock drawer and the H and R in the undee drawer

Charger Fan, that shop still open on Friars in San Diego? They did a fabulous trigger rework on a revolver the Gardner stole

and ditched in mud Pacific Beach. Didn’t know springs could warp that bad…Ian