Hi. I have been shooting handguns for a year and a half. I have a .22 russian target pistol (Izh35m) and a Remington R1 enhanced 9mm and now i have purchased a used DW 15-2 V 6″ (i think) I have no paperwork, extra barrels or accessories, only the revolver. Serial number is B006945. Anyone who has an idea of production year? It hasnt been used much, no wear and tear and a deep shiny Black surfase. I paid about 500$ for it. In Norway guns are expensive, about 1300$ for a new Smith 686. You also have to be a member of a pistolclub for six months, then you can send the applicationform (one for each gun) to the police and after 2-3 months you get it back approved (hopefully). I chosed Dan Wesson because it seems like a quality revolver and nobody else have it😀. Lars

Is your’s a fixed barrel model ?

Welcome Lars from the State if Wisconsin to this forum lots of people who know the Dan’s here.  I am not an expert so will let another member help you out.

It has a scratch around the barrel

Its not a fixed barrel. 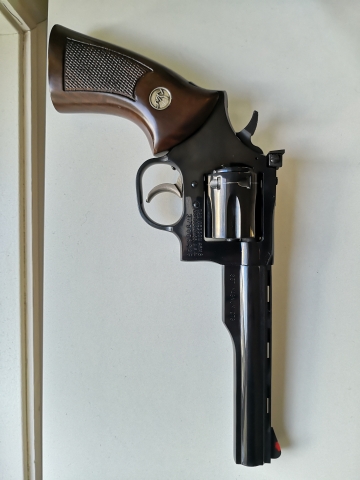 It looks to be in excellent shape. You really need a barrel tool to properly take care of the gun and get the most out of it. If you don’t have one and can’t get one let me know. I have seen a tool made out of a socket for a wrench with the sides milled away to leave the two tines. It then can be used with a wrench.

Dans are fabulous guns. The steel is first rate. Dan Wesson was a metalurgist. They are as durable as a Manurhin and if the barrel tube gets worn it is no big deal in the States to acquire another and swap it out in 2 minutes. There is one little peculiaritie to a 15-2. Because the latch is in the front of the cylinder there is no latch on the sideplate to protect it from the extractor star. When you are ejecting cases keep the pointer and middle finger of your left hand pushing through the frame against the cylinder to keep it from closing while the ejector rod is ejecting. The cylinder tends to close unless kept open by the two fingers. The result of not doing that is nasty scratches and gouges on the sideplate. Almost all used Dans have them because by the time the new owner realizes what happens the scratches are there.

You did real good if you paid 500 for it. That would be a good price in the States. In Norway it would be what we call Grand Tefth Dan Wesson, or GTDW.

Barrel tool just ordered (from Denmark) 👍 No scratches on the sideplate (yet).            (it is the cylinder, not the barrel who has a scratch, i am a bit lost in translation)

When i bought it i went straight to the range and shot a few .38’s. A couple of cartridges didnt enter all the way, so i went back to the shop with it. He sent it to his gunsmith who said it was bad machining from the factory, so he grinded a bit behind the extraktor. He also thought that i was the one who had shot most rounds with it since the gun was new (I have shot 18 rounds!) He had also done several triggerjobs on DWs.

Its still a bit tight with 357 magnum. The empty shells stick a bit in the cylinder. 38’s is fine. 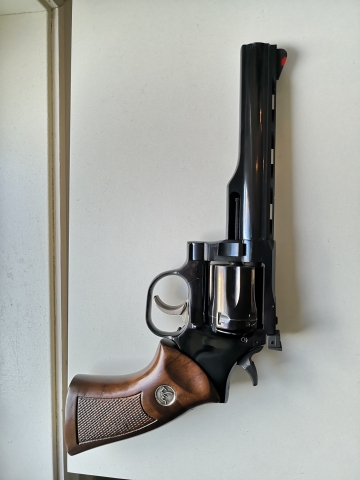 Hello. It’s a great looking gun. And right you are about having a solid, practically indestructible weapon to show off.

My Baby Lets Me Do What I Want

Good day Lars…you did really well on that DW & price!

Larsyboy said
Its not a fixed barrel.