Opening up this thread to get some opinions on many questions:

I am looking into ordering my first LB Custom Grip.   How many of you has ordered something Custom outside of the standard offering list?    Pics?

A Pachmayr Gripper just sold for $108 on epay.   I never saw that coming.   How rare are the Pachmayr Grips with the Dan Wesson Medallion?   (Not selling my only one)

DW vs. Hogue:   DW made from a one-piece blank.   Hogue glues two halves to make their one-piece grip.   Of the many Hogues I have, one never fit right and I didn't return in a timely manner, so that is a thorn.

Hogue vs. LB?   Will either of them install DW Medallions on their grips.

Someone on the forum posted a White Grip with DW Medallion.   I cannot find the posting now.   Was there information on who made it?   How it was made?

How many of you own a "Big Butt" Grip?   And what was you reasoning for acquisition?    They (Hogue) look good, but how do they feel?   Advantages?   Disadvantages?

LB will install the medallions if you send them to him.  I ordered my own wood also and sent that with the medallions to LB, his grips are excellent.  I have ordered the Gripper, standard, and thumb rest from LB.

I wrote a long reply to Scout but it disappeared. I will try again. I sent LB a large piece of lightered pine, enough for 4 grips. It had many cracks in it and he was only able to make one. A finger groove combat that is gorgeous. The fat lighterknot is like amber. It was $75 but I sent him 150.. He said he won't EVER do that again. He had to clean the resin off every tool he used. So, it is one of a kind. I have a Hawaiian Koa left handed target grip he made for someone who never paid for it. I think I have a couple more he made but I acquired with guns I bought or on eBay

I don't care for the Hogue wood grips. I think MA y have fitting problems.

I don't know about Hogue but as DA noted, LB will install them if you supply them.

I hope Grippers keep appreciating. I have a bunch of them. The DW Grippers come with the IHMSA Field Pistol packs. 32 and 357 mag. Maybe 22 too. I don't know if they were sold separately. I have seen them sell on eBay for between 150 and 200. DW Presentation grips were available separately I think at one time. Large and small frame. They may have been standard with Hunter packs. They too sell for a good price.

Snake-eye has a faux Ivory smooth target made by LB on a hand polished bright stainless 715 with engraved shroud and cylinder. It has Sterling silver medallions LB afixed. It was in one of the past calenders.

Not sure what the Big Butt grips are but early DW target grips, had wide bases to force your hand high on the grip for control. I have a custom Peachwood grip that I do not know who made be it is beautiful beyond belief. It is actually the  color of a ripe peach. By 1977 that style grip ended and they became more slender. The Hogue you mention is probably for bullseye shooting.

There is one more special grip. The first 500 44 mags made were the Dove Grey with solid rosewood grips with pewter medallions. I have 2 on a pair of guns and 2 more I acquired from ebay or Gunbroker. Only 500 were made. Some folks used those early special run guns for silhouette and replaced those grips with rubber Hogues or Pachmyers. They ended up on the market without anyone realizing the providence. I have a chunk of claro walnut I intend to send to LB one day. I saw a DW grip in Claro walnut on eBay sell for 600 once. I think I bid 200 and was flabbergasted that it sold for that much. Claro walnut is from California Walnut trees that were grafted to American Walnut scions. At one time the walnut industry was very large but most of those orchards were converted to vineyards. The California Walnut may be extinct in the wild or extremely rare. It was a natural burl.

Here are some custom grips you might find interesting:

Top: Faux Ivory made by LB who also inserted the sterling silver emblems which have tarnished over time. I obtained the emblems from a Forum member who had some made years ago.

Next down: Faux Ivory also by LB who inserted the solid gold emblems. I had the emblems made and still have the mold.

Next down: Buffalo Horn by LB.

Bottom: Left side - small frame grips; top & bottom are unknown (to me) makers. Center, white grip appears to me to be factory made (not by LB), probably faux ivory. Maybe by or for Dan Wesson factory? Note that it is actually larger than the large frame white grip on the right.

Right side - large frame grips; bottom one is unknown maker; Top white grip also seems to be faux ivory. I speculate that it was made for a commemorative gun but not used. 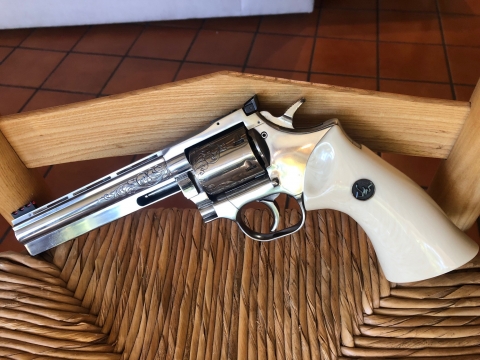 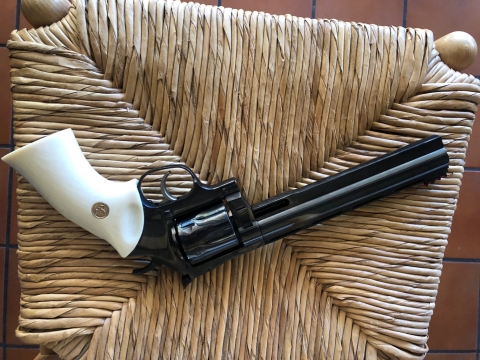 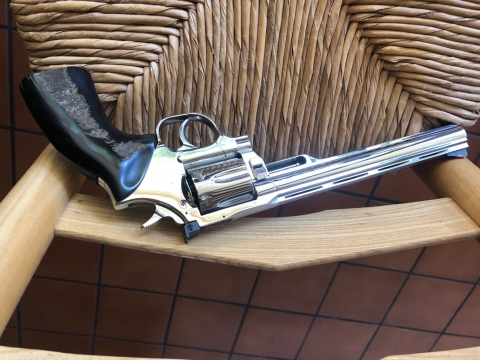 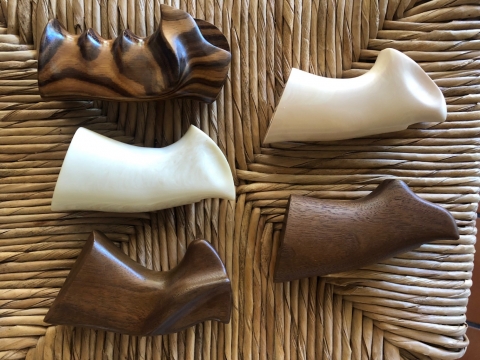 Last picture top left reminds me of a Thompson Contender grip. Maybe a custom Hogue? Bottom left may be something the factory made at some point. I have one similar. Right side bottom looks like a a user customized grip. All the above is purely speculation. I bought a "RARE" walnut grip blank off eBay but it has a round tang hole. Maybe made by LB? Does anyone else have a large frame walnut blank?

I'm curious about the comments on the Hogue wooden grips.

I have one & have had not one issue with them. The screw supplied is a slot head, but that was my only issue! What was your concern? 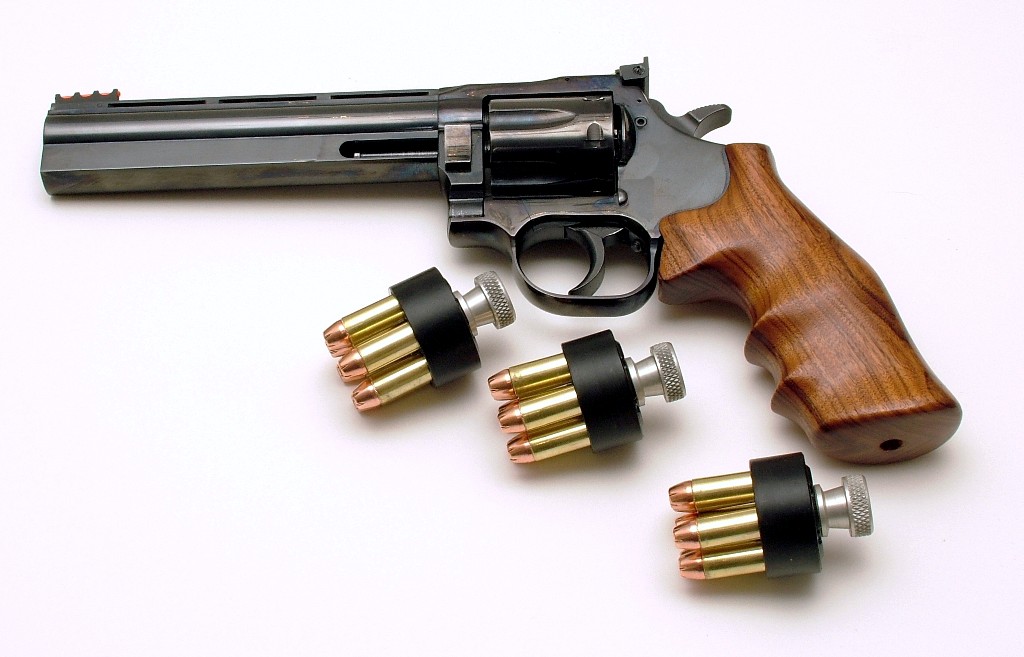 Right there with you on that, mister callan. They fit my 15-1 just as well as my 15-2, and I really appreciate the added control it seems to give me. 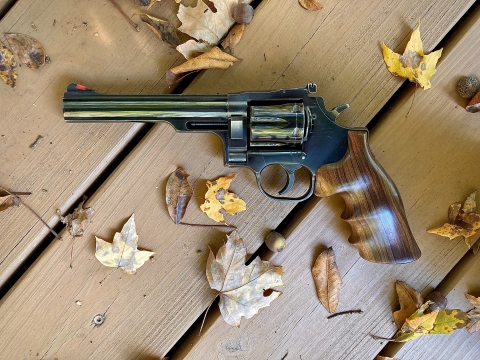 I also enjoy my Hogue grip. I would like a Zebra or a cool LB at some point.

mister callan said
I'm curious about the comments on the Hogue wooden grips.

I have one & have had not one issue with them. The screw supplied is a slot head, but that was my only issue! What was your concern?

I had to find it to remember.    The screw hole was not aligned with the gun.   Screw would not go in.

Did you try returning it?