Ahead of his time.

I’m sure this has been brought up before. But have you more “seasoned” Dan Wesson lovers ever noticed how the other major revolver brands have adopted a lot

of Mr Lewis and Mr Wesson’s designs over the years? Two piece barrels, front cylinder release securing the yoke to the frame, flat muzzle instead of a crown, adjustable trigger stop, grip stud instead of a flared frame and interchangeable front colored sights. They really were ahead of their time.

Yes, both men were definitely forward thinking individuals with the talent and skills to make their ideas a reality. It’s only natural that other makers would eventually adopt these improvements into their own products. So, as you say, they were ahead of their time.

While still at Colt in 1968, Lewis did a lot of design work on the Trooper MK lll, and two of the improvements were the transfer bar safety and the coil mainspring. Both of these were borrowed from the Iver Johnson revolver of 1896. Now that’s definitely forward thinking! 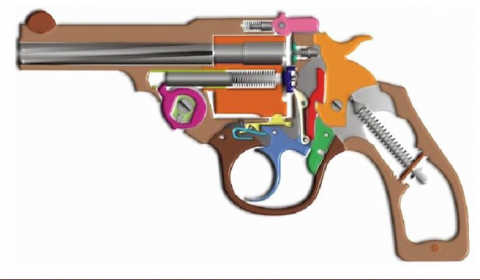 If you know the Colt Trooper MK lll, then this illustration should look familiar. Both components were also incorporated into the Dan Wesson revolver.