I have been having issues working up a load that will be useable with my 15-2. I installed the 6″ barrel (used the gauge) and have not had any luck with the loads I am trying.  They are all accurate out of my S&W 686 5″.  When I say accuracy issues I am taking about all over the place at 15yds.  I have been working up 180gr loads using Missouri Bullet Co. Hi-Tek coated bullets and have used 2400, H110, and Unique.  As stated earlier, the loads are very accurate out the the S&W (one ragged hole), but I am talking about 8″ groups with the 15-2.  I do have another 6″ barrel I will try.  Just wondering if anyone has any idea about adjustments to the gun.  In addition, does anyone have any good load data for 180gr bullets for the 15-2?  Thank in advance.

I had just installed a new 6″ barrel in my 15-2 and experienced similar results although my group wasn’t quite that large.  I noted that when received, my barrel’s muzzle was sufficiently burred as to prevent inserting the pilot of my barrel nut tool and the forcing cone/rifling transition was rough and/or burred enough that I couldn’t draw an Otis Ripcord through it.  I removed the burring from the muzzle with a chamfering tool but had nothing to deal with the forcing cone.  I test fired with .357 158 gr. JSP and FMJ ammo only and suspect that the rough forcing cone/rifling transition may have damaged or deformed bullets.  I also noted severe leading, not something I’d have expected with jacketed rounds.  The second barrel I received didn’t exhibit a burred muzzle or the rough forcing cone/rifling transition but I haven’t been able to take it to the range to live fire test it.

Makes me as an RMA manager for a firearms manufacturer wonder if DW is having some manufacturing issues with barrels.

Interesting. I have tons of old and brand new barrels and haven’t run into rough forcing cone or muzzles yet. BUT I just recently bought a stainless 22 2.5″ assembly that had damaged threads which made it impossible to thread the barrel all the way into the frame. I’m awaiting a response from Bob at DW. I’m sure he’ll make it right.

Have you tried adjusting the barrel tension by tightening the bolt more? It sounds crazy I know but I’ve found the tension on the barrel is every bit as important as the gap. Have you set the gap at the tightest or loosest chamber?

I believe that I may have found the problem. After reading the reply from grumpyoldretiredcop I checked the crown and found a decent burr at the muzzle.  =I swapped out the barrel for a known good one and will try to get out this weekend.  I also just ordered a muzzle lapping toolset from Brownells. 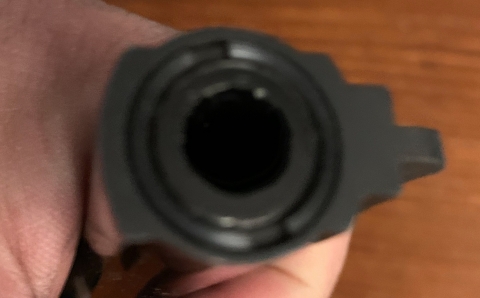 JC, hopefully the barrel swap does the trick.  If it helps any, I went to the range yesterday with different ammo – PMC 158 gr. JSP instead of the Indepdence 158 JSP.  After having a few fliers while sighting in the new load, the barrel seemed to settle down and produced decent groups at 10 yards, both off the rest and off hand. I’ll post the photos in the thread referenced above to avoid duplicating them.  I suspect that either the PMC jackets are just tougher and resisted damage at the forcing cone/rifling interface and they knocked the irregular surface down.  I can now pull a Ripcord through the bore without much more than the normal effort and a Q-tip no longer snags at the interface, either.  There was absolutely no trace of leading with the PMC, unlike the previous range session.  The second barrel that I received was installed in my 9-2, showed none of these issues and shot very well right out of the box.

Barrels like these shouldn’t have these faults when received but hopefully that information will help.