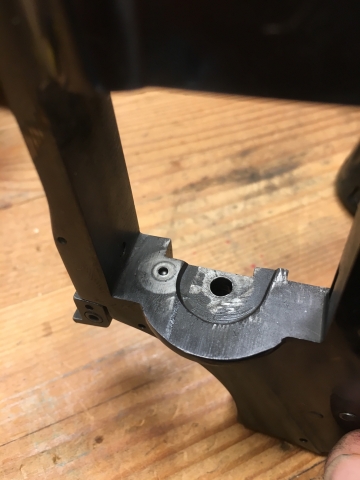 I picked up this 15-2 and noticed excessive wear on the front of the frame from the small ring on the cylinder. The gun is completely disassembled and with the cylinder put back is it spins but seems to be rubbing because it does not free spin. The ball on the rear of the frame is removed also. Any suggestions on what could be going on? 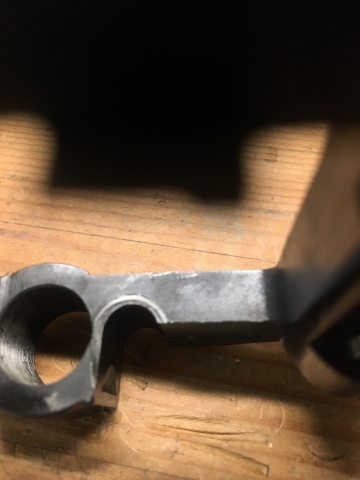 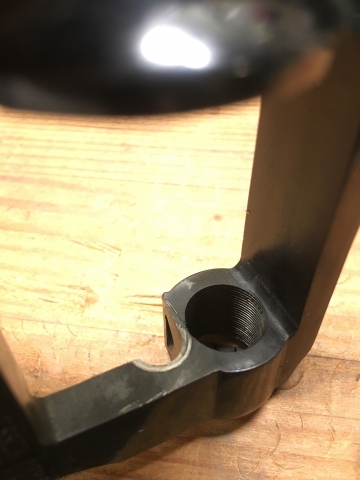 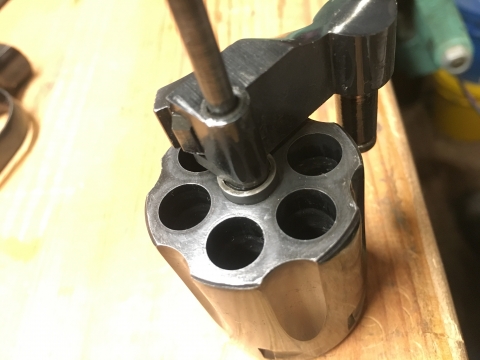 It appears to me that those are all normal wear marks on a well used gun. Have you disassembled the cylinder from the crane?  If not, it probably just needs cleaned an lubed.

Ditto to what rwsem has posted. This marking is very common to early 15-2’s (I have one also) where the cylinder bushing rides directly on the frame as opposed to later designs that have an improved collar on the upper crane leg for it to ride on. No damage is occurring; it’s just the way early DW’s were made. Make sure that when you put the detent ball and spring back in place that you don’t over tighten the set screw. Usually just flush with the frame is fine. Any tighter and the cylinder may become unnecessarily hard to open and close. I don’t think your 15-2 is nearly as worn as mine, so go ahead out to the range and have some fun with your DW!!

Thanks guys. I’m headed there now.

Very nice explanation 3ric! I went to look at my own old one and it has the early stages of this kinda wear. Since it shoots straight and true the odd wear spots have never been an issue to consider.

My Baby Lets Me Do What I Want

Colt Trooper MK III owners never thought it was an issue to consider either. Nobody ever complained about the performance, accuracy or longevity (even with a steady diet of full house .357 loads) of the MK III. Karl Lewis designed the MK III cylinder/crane assembly (that eliminated the previous upper crane leg shoulder design of older Colts) to be less complicated to produce. The whole point of Colt’s revolver redesign project of 1968 (which they hired Karl Lewis to engineer) was to reduce production costs so they could regain some of the law enforcement market they had lost to S&W, and most of those engineering ideas were eventually carried over to the Dan Wesson revolvers. There is only the same small amount of frame surface on a swing out revolver for the cylinder to ride against as it turns, whether it’s the upper crane leg shoulder, or the frame itself. The difference between the Colt and Dan Wesson cylinder was that the Colt’s “collar” is integral to the cylinder, where the Dan Wesson cylinder had the removable bushing. Later, Dan Wesson decided to go back to the shoulder on the upper crane leg design. In retrospect, this probably should have been done when the model 15-2 was first introduced. The “pork chop” Dan’s crane is held in place by the leg on the barrel shroud, and there is very little movement fore and aft. The 15-2’s lower crane leg design unfortunately allows a little movement, and as you close the cylinder (against the spring pressure of the detent ball) the cylinder face can drag on the rear of the barrel unless a little rearward pressure is applied. The addition of the upper crane leg shoulder helped to mitigate this problem.