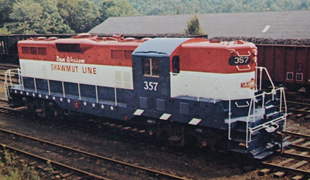 Let me begin by introducing my new friend Dudley, who (among his many exploits and accomplishments in life) was one of 4 Members on the Board  of Directors of the original Dan Wesson Arms. More to come soon with much previously unpublished information about the early days of Dan Wesson Arms. 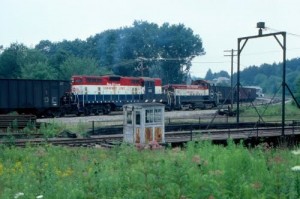 Dudley was in the railroad business, and was instrumental in the reorganization of a local rail line in Pennsylvania, the Pittsburg & Shawmut, a regional line devoted to transporting coal from several mines for eventual shipment throughout the North/Central East. The mine and railroad were failing financially, and the mines were determined to be the cause, they simply were not workable at a profit. The mine was sold, and the proceeds were used to renovate the eight very overworked and under maintained locomotives, so that they could be used to transport coal from other mines.

As part of the renovation, Dudley had each locomotive repainted Red/White/Blue. Given the strong firearms heritage of northeastern Pennsylvania, each locomotive was renamed and renumbered in honor of American Firearms manufacturers. The first was the Olivia Remington, numbered for the year Remington Arms was founded, there was a Smith & Wesson, etc. Eventually, a ninth locomotive was acquired, originally named the Betsy Ross. Since Dudley had just joined the Board at Dan Wesson Arms, he named this one the Dan Wesson, and numbered it 357.

At some point in time much later on the P & S failed, and the assets were liquidated. Dudley told me that once many years later he and a friend were fishing in New Hampshire, near a set of tracks, he looked up to see old #357, the Dan Wesson, go charging past, still in R/W/B! 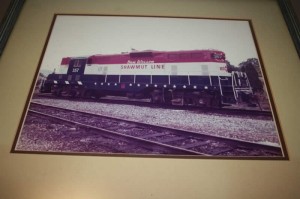 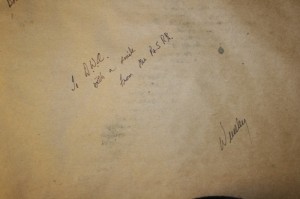 I have one of the original framed and matted pictures given to Dan from Dudley Dumaine from Pittsburg and Shawmut Railroad.  It is signed “ To D.W.A. with a smile from the P.S.R.R…Dudley”  dated 12/25/1976.